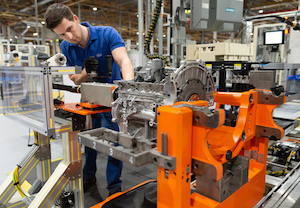 Work at a production line at Ford’s engine plant in Bridgend, south Wales, has been put hold for five days, just as the company starts work on building a new engine.

The halt is on the AJ line which is making an engine for Jaguar, the BBC reported.

A Ford spokeswoman told Automotive Logistics the company initiated five days’ downtime from October 29 on a line which builds engines for a third party. She declined to comment further.

Just over a year ago Jaguar Land Rover (JLR) announced it would end its contract with Ford in 2020 for the supply of six- and eight-cylinder petrol engines from Bridgend. The agreement dates back to 2008.

In April this year, JLR said it would shed 1,000 agency staff jobs at its Solihull plant in central England over the next two years because of “continuing headwinds impacting the car industry.” The carmaker says sales have suffered due to a lack of consumer confidence and lower demand for diesel engines.

The curtailment coincides with the start of production at Bridgend of what Ford describes as an all-new, technologically-advanced, fuel-efficient petrol engine.

The three-cylinder, 1.5-litre EcoBoost is being built on a state-of-the-art flexible manufacturing facility following £100m ($129m) of investment, the company said.

The new powertrain, which is replacing the existing four-cylinder engine produced at Bridgend, debuts in the Fiesta ST and completely refreshed Focus models.