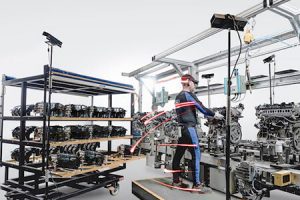 Ford is using motion tracking technology on workers at its Almussafes plant, in Spain, to help it design less physically stressful workstations on the production line. The OEM said the goal was to reduce worker injuries while making the workstations more efficient and improving manufacturing quality.

In a pilot project, workers on the engine assembly line there have been given special suits to wear with sensors that help to promote good posture. The system, which was created by Ford and the Instituto Biomecánica de Valencia, involves 70 employees in 21 work areas.

Such technology is more typically used by athletes to improve performance or to replicate their signature skills in video games, according to Ford.

“It’s been proven on the sports field that with motion tracking technology, tiny adjustments to the way you move can have a huge benefit,” said Javier Gisbert, production area manager, Ford Valencia Engine Assembly Plant. “For our employees, changes made to work areas using similar technology can ultimately ensure that, even on a long day, they are able to work comfortably.”

Workers have been wearing a skin-tight suit that incorporates 15 tiny movement tracking light sensors connected to a wireless detection unit. According to Ford, the system tracks head, neck, shoulder and limb movements, which are recorded by four specialised motion tracking cameras near the worker and used to produce a 3D skeletal character animation of each user. The measurements captured by the system, such as posture, arm height and arm extension, are then used to design workstations so they better fit employees.

Ford said it was now considering using the technology at its other European manufacturing facilities as part of its strategy of lowering worker injury rates worldwide through the introduction of ergonomic technologies and data-driven process changes.