Workers at Ford’s São Bernardo do Campo plant in Brazil have been on strike since last week over the carmaker’s attempt to lay off workers in the face of excess capacity caused by the dramatic slump in the Brazilian economy. There has been no production at the plant since 9th September. 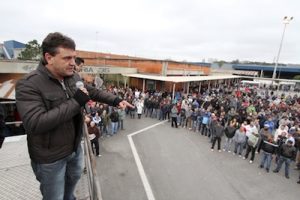 The metalworkers union ABC Metalúrgicos called for an open-ended strike on September 10th when it said Ford had issued redundancies to 200 of its members.

"We will not accept this arbitrary and irresponsible attitude of the company after years of negotiation with the workers,” said the executive director of the union, Alexandre Colombo, in a report on the union’s website. “Now it is a strike until Ford resumes talks and reviews the dismissals.”

According to the union, Ford’s action contravenes an agreement made in March that guaranteed jobs at the plant until March 2017.

As many as 4,300 workers took up strike action in response to the proposed cuts last Thursday. The strike is in its fifth day according to the union, though Ford said talks have resumed.

"Ford has resumed negotiations with the union,” said the company in a statement. “We look forward to working together to find solutions to the workforce surplus at our São Bernardo do Campo plant due to the slowdown in automotive demand industry-wide."

Ford confirmed that production has been at a standstill since 9th September but did not say how it was going to compromise given similar action taken at other plants in Brazil. The strike at São Bernardo do Campo follows action taken by workers at plants owned by GM and Daimler last month, again according to the OEMs because of overcapacity in the sector.

New passenger vehicle sales are reported to have fallen more than 20% this year and commercial truck sales are down nearly 45%.

When GM said last month that it was cutting 800 jobs at its plant near São Paulo, workers went on strike for two weeks, forcing the carmaker to put the affected workers on paid leave for five months, according to news source Bloomberg. GM and the Brazilian government each paid half of the wage bill.

GM was also forced to stop production at its Gravatai plant in May this year because of a dispute with its outbound transport providers Tegma and Transzero over freight costs.

Last month Daimler said it was cutting another 1,500 jobs at its truck plant, also in São Bernardo do Campo, in the face of a 44% drop in sales for the first half of the year. The vehicle maker has already cut 3,000 jobs across the country since 2013. Workers voted for strike action but Daimler reported that it secured a labour deal that delayed the layoff until August 2016.

Workers at the plant have agreed to 20% cuts to both their working hours and their pay, according to a report by Reuters. Brazil’s state is ready to compensate workers for half of the pay reduction, said the news source.