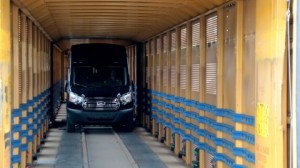 Ford has developed a rail car with some of North America’s leading rail providers for delivery of its new full-size Transit van in region. The rail cars have an elevated lower deck able to accommodate the van, which measures almost 2.8m in height and is therefore too tall to fit in the standard two-storey rail cars used by the finished vehicle sector. Canadian National, Union Pacific and Norfolk Southern worked with the carmaker on the solution and more than 350 rail cars have now been modified.

The rail service is being used on deliveries beyond an 800km radius of the Kansas City assembly plant in Missouri where the van is made. The company said that it could deliver Transit vehicles more efficiently and for less cost by designing modified railcars and incorporating them into the shipping network. Ford will use road transport for deliveries within the 800km radius.

The rail cars have been modified to load as many as seven medium- and high-roof Transit vehicles on the lower deck and as many as seven smaller vehicles, such as the Ford Fusion, on the shorter top deck, depending on the vehicle’s length. The overall height of the railcar remains the same as traditional railcars, so as not to interfere with overpasses and tunnels.

“Use of these modified railcars helps us to efficiently ship these large vehicles from our assembly plant, deliver them to our dealers and get them into the hands of our customers faster and more cost effectively,” said Chris Lemmink, Ford vehicle logistics manager.

Ford began working on the railcar project in 2010, coinciding with development of the all-new 2015 Transit. The company said it now expected approximately 50% of Transit orders to be medium- and high-roof configurations.