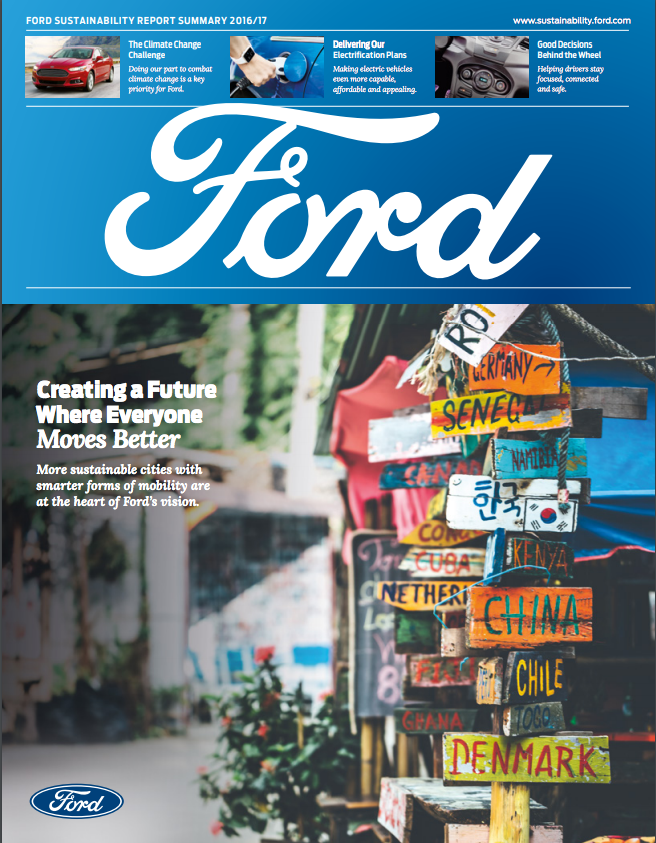 Ford has released its annual Sustainability Report, detailing its environmental performance across the business.

In it, the company has highlighted its position as the first carmaker to join the ‘Improve Water Security’ initiative set up by the Business Alliance for Water and Climate Change – a coalition dedicated to monitoring and responding to the impact of business on water resources and the climate. The company said its Dagenham facility in the UK had reduced water use by 17.5m litres a year.

Ford has also expanded its aluminium closed-loop recycling system to three factories in the US, namely the Dearborn Stamping, Kentucky Truck and Buffalo Stamping facilities. Ford’s system at the factories recycles 9,000 tonnes of military-grade aluminium alloy a month, enough to build more than 37,000 F-Series truck bodies a month.

Furthermore, the report said carbon emissions from its plant in Saarlouis, Germany, had been cut by 28,000 tonnes a year thanks to a new €600m ($716m) electricity and natural gas heat generation system.

The carmaker said it was also working to reduce pollution in the supply chain as part of the Partnership for a Cleaner Environment (PACE) programme, which has grown to more than 40 suppliers in 40 countries – up from just 25 suppliers in 2015. PACE now focuses on water and energy conservation, waste reduction, and reductions in carbon dioxide and air emissions. Carbon emissions could be reduced by nearly 500,000 tonnes globally in the next five years, according to Ford.

Ford has what it calls Aligned Business Framework (ABF) agreements with 80 production and 27 indirect suppliers. The agreements are designed to strengthen collaboration and develop a sustainable business model. FedEx, Penske and Union Pacific are among the ABF-affiliated transport and logistics providers.

Last month, meanwhile, Ford unveiled its new electric delivery van, which has been jointly developed with logistics provider DHL. The StreetScooter WORK XL is based on a Ford Transit chassis fitted with a battery-electric drivetrain and a body designed and built to Deutsche Post DHL specifications.

Ford said around 150 early-build StreetScooters would be manufactured this year at its plant in Aachen, Germany. Deutsche Post DHL will use the ‘e-vans’ to support its urban parcel delivery service in Germany. DHL and Ford plan to build 2,500 e-vans by the end of 2018.

“We know climate change is real and a critical threat, and we will continue to work with leaders around the world in support of ambitious global greenhouse gas reduction targets,” said executive chairman Bill Ford. “At the same time, we have the opportunity to make real environmental progress as we move into a world of smart vehicles and smart environments, including car sharing, multimodal transportation and dynamic shuttles."