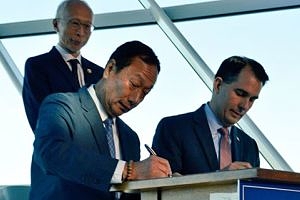 Foxconn Technology Group, the world’s largest contract electronics manufacturer by revenue, has confirmed it is considering Michigan in the US as another investment location – just weeks after announcing a major project in the state of Wisconsin.

The South China Morning Post recently reported that the Taiwan-based company was considering growing its small presence in Michigan by investing in facilities for the research and development of autonomous vehicles.

In response to enquiries by Automotive Logistics, the company highlighted the work being done by the state’s governor, Richard Snyder, to create a “welcome environment for investment", adding: “As we have previously said, Michigan is one of the states that we are considering as an investment location and our company is conducting an evaluation of the conditions for establishing a facility in that state.”

The company declined to go into further detail at present, however, stating: “As a company practice, we will only announce details of any investment plans after related negotiations have been completed and only after we have received the relevant approvals from our company’s board of directors and any other relevant authorities.”

Snyder has recently returned from his seventh investment mission to China. During the nine-day trip, he met with 83 Chinese companies, 30 of which have “active potential to invest in Michigan”, according to official government communications.

Foxconn’s CEO Terry Gou (pictured, left) was among the industry leaders Snyder met, and he also toured the company’s facilities in the country.

“We had a very productive dialogue about the importance of talent in manufacturing and the future of autonomous driving, in addition to a tour of Foxconn's world-class products and manufacturing facility,” said the governor.

In December last year, Snyder, joined by senator Mike Kowall and mobility leaders from Ford and GM, signed Senate Bill 995 (sponsored by Kowall), allowing for the operation of autonomous vehicles on Michigan’s roads. Prior to that, only testing of these vehicles by manufacturers was permitted.

French autonomous vehicle maker, Navya, recently announced that it had chosen the Ann Arbor area in south-east Michigan as the location of its first US assembly plant.

Foxconn, which counts Apple and Dell as major customers, recently said it would invest $10 billion in a Wisconsin-based plant to assemble LCD panels.

Under that agreement, the company was set to receive a $3 billion, 15-year package of tax incentives from Wisconsin.

According to the South China Morning Post, the company has had a presence in the US since 1988 and has operations in Alabama, California, Indiana, Massachusetts, Michigan, North Carolina, Pennsylvania, Texas and Virginia. Its current workforce in the US totals about 3,000.