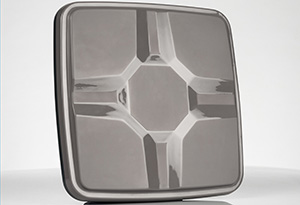 The Fraunhofer Institute for Integrated Circuits (IIS) has invited applications from companies interested in helping it test a new, multi-directional RFID reader antenna that it believes will provider higher read range and accuracy than current antennas in difficult environments.

The Multibeam Antenna, which features nine directional beams, can be used to replace multiple standard individual antennas in different locations and can detect directional movement – allowing it to distinguish, for example, between incoming and outgoing goods or between moving and stationary objects. It can also read RFID transponders in bulk concurrently and should provide high rates of data capture, even with metal objects or with liquid containers, Fraunhofer IIS lab tests have suggested.

“The antenna provides up to nine individual beams, allowing for directional reading of transponders. This way, we achieve a higher read range and accuracy without mechanical adjustments of the antenna,” confirmed Dr Mario Schühler, group manager antennas at Fraunhofer IIS. “As a result, we can be more specific about what RFID transponders we detect and read.”

The new antenna can be used in conjunction with standard readers and is easy to integrate into existing RFID systems. It is suitable for all ultra-high-frequency applications and both indoor and outdoor use.

A spokeswoman for Fraunhofer IIS told Automotive Logistics the Multibeam Antenna should save time and effort in installation. “If you look at today's RFID gates with eight or even more individual antennas, those setups can benefit from reducing the number of antennas to two, for example,” she said.

The antenna is intended for use with passive RFID tags but can also be used with active ones if the reader supports it, she added. Due to its size, it is intended for fixed, rather than portable, readers.

The organisation is looking for 3-5 partners to take part in the pilot, which is scheduled to run for six months from August and will test the antenna in environments where standard equipment has not produced sufficiently high read rates.

Fraunhofer IIS will be outsourcing production to an electronics manufacturing services supplier and has already identified a number of possible distributors. It may also licence out production and sales to a third party, she said.

Though the final cost of such antennas has yet to be determined, “initial price estimates assume a lower four-digit range”, added the spokeswoman.