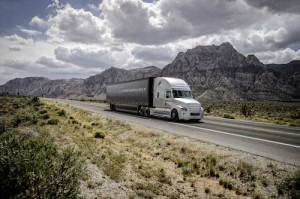 Daimler’s Freightliner subsidiary has launched the first autonomous trucks to be granted a license for road use. The Freightliner Inspiration Truck is equipped with a Highway Pilot system, which includes a complex stereo camera and radar systems with lane-keeping and collision-prevention functions. It regulates the speed of the truck, applies the brakes and steers. Two trucks will be able to operate on regular routes in the state of Nevada and both will have to have drivers in the cab at all times.

“The driver is an important part of the system and must remain in control of the truck in certain traffic situations on the highway and on country roads, in city traffic and when hooking up a trailer or making deliveries,” said Daimler in statement.

As soon as the truck is safely on the highway, the driver can activate the Highway Pilot system following a visual prompt in the instrument cluster. The vehicle switches to autonomous mode and adapts to the speed of traffic.

Daimler Trucks North America transferred technology first demonstrated last summer on a Mercedes-Benz Future Truck in Magdeburg, Germany and adapted it for use on the US highway.

The Freightliner Inspiration Truck is based on the series-produced US Freightliner Cascadia model but with the addition of a front radar and a stereo camera plus assistance systems such as the Adaptive Cruise Control.