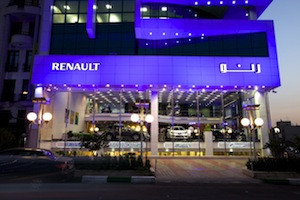 The recent lifting of economic sanctions against Iran has been quickly followed by a rush of interest by international carmakers who are eager to make the most of a market forecast to hit 8m within the next decade, as well as reach the wider market in the Middle East and Africa.

As reported in January, the removal of the sanctions is a major step forward for Iran’s domestic car producers and those international brands ready to set up joint ventures with them.

Last week, during Iranian president Hassan Rouhani’s visit to France, carmakers PSA Peugeot-Citroën and Renault-Nissan, both of which already have a presence in Iran, made joint venture announcements. PSA has its work cut out in regaining its formerly strong position in the market. Renault is in a better position, having not stopped production with its partners during the embargo, which was put in place in 2014.

However, the French carmakers, along with their domestic partners in Iran have their work cut out for them. The car industry in the country has been left in a “devastated position” according to market analyst IHS Automotive. Several OEMs left the country while others were left bankrupt by the height of the sanctions in 2013.

PSA to make up lost groundWithin a week of the removal of the sanctions, however, PSA Peugeot-Citroën announced a 50/50 joint venture deal with Iran Khodro, the country’s biggest vehicle maker, which will come into effect by mid-year. The venture is expected to invest up to €400m ($434.6m) over the next five years in manufacturing and R&D capacity for local production of the Peugeot 208, 2008 and 301 models, according to PSA. Working together, the companies will develop a plant in the capital Tehran that will produce both PSA and Iran Khodro brand vehicles. The first vehicles will roll off the production line at the plant in the second half of 2017, and the company said it will rapidly reach an annual capacity of 200,000 units. The carmaker said it aimed to hit sales of 1m by 2025.

PSA’s enthusiasm is understandable given the ground it has lost since the embargo that was placed on trade in 2014. Though its production continued after the embargo because of the feed of parts through the supply chain, it actually pulled out of Iran at the highest point of the sanctions.

Parts and components were in transit and being delivered there from Turkey and China, according to Vigier and Jacinto. Therefore, while PSA had left the country and did not have straight relations with Iran, its models continued to be produced with its joint venture partner.

However, in France, the end of parts and kit exports to Iran had a drastic impact on plants and labour, according to analysts. There were several layoffs and line closures, along with the fact that less money was then won for PSA and its suppliers.

“PSA’s success has been based on the quite accessible Peugeot 405, Peugeot Pars and Peugeot 206 models,” said Vigier and Jacinto. “The first two will end production soon, while they will clear up stocks on the local market, [but] this could take up to two years.”

The new models the company intends to produce, including the Peugeot 301, 208 and 2008, will be more expensive than the previous models. Added to this, PSA will have to contend for sales in the market with more competitors. These include Chinese OEMs, including Chery, Lifan, Great Wall, Geely and Jianghuai, which have been the main performers, and which have benefitted from their early investments in local production and from certain imports. While those Chinese brands do suffer from a bad quality image because of counterfeit parts and the copying of EU-produced vehicles, their low prices make their offerings attractive, said IHS’s analysts.

“We do not expect PSA to recover past shares in Iran both in terms of production and sales,” they concluded.

Despite that view, Peugeot currently estimates the number of its cars on the road in Iran at more than 4m.

In a statement, PSA said the latest agreement would restore contractual relations for the manufacture of Peugeot-branded vehicles there. It also stated that the agreement would cover the capacity to export joint venture products across the region. A spokesperson for PSA said its export plan for the wider Middle East and Africa region would depend on each country’s specific regulations and logistics costs.

“This strategic agreement turns the page on the period of international sanctions and enables PSA and Iran Khodro to start a new chapter in their 30-year history of cooperation,” said Carlos Tavares, chairman of PSA Peugeot-Citroën’s management board. “Our shared ambition is to offer our loyal customers high-tech products to deliver mobility that meets the highest comfort, safety and environmental standards.”

Renault to intensify operationsRenault has also revealed plans to step up cooperation with Iran Khodro along with its other partner in Iran, Saipa. Last year the carmaker produced two new vehicles with its partners: the Logan pick-up (sold as the Tondar) with Iran Khodro, and the Sandero with Saipa. The company said as soon as smooth relations had resumed between French and Iranian banks, it would intensify operations and prepare future model releases in association with its two local partners.

“With a market amounting to 2m vehicles by 2020, Iran has undeniable potential,” said Bernard Cambier, director of the Africa-Middle East-India region.“Renault has ambitious plans in Iran and advanced discussions are currently underway with Saipa and Iran Khodro to step up our presence, develop our structures and support the automobile sector in Iran.”

Since 2003, Renault and its partners in Iran have produced close to 500,000 vehicles. It is in a slightly better position than PSA because it did not actually leave Iran. The carmaker had a different deal with IKCO on the production of the Tondar and, according to IHS, this in fact meant it was not as badly affected during the sanction period and during 2014/2015.

“The brand is well perceived because the recent success of its models [those are mainly based on Dacia brand recent offerings] in many worldwide markets,” said the analysts. “Authorities and consumers appreciate that the brand did not leave Iran even during the embargo.”

Renault-Nissan’s product portfolio appears quite large and well adapted to Iranian demand. It offers the Renault Tondar (Logan), Sandero, Tondar pickup, and will launch the Tondar SUV (Duster), and possibly the Renault Kwid as entry-level models. It also has in its portfolio some more valued models such as the Renault Safrane, Talisman, Megane, Clio and Captur.

The Tondar and Sandero are already produced in Iran, while the Clio is soon to be launched. It will be followed by the Captur and the Kwid, according to IHS. The Sandero has been available with a CNG engine in Europe and could be strong in Iran too.

“Nissan could also improve sales as it is perceived as an expert of SUVs and pickups; the Nissan Tiida is already scheduled to be built locally. Several SUV models might be imported and more Nissan models could be built in Iran,” said the analysts.

* Representatives from PSA and Renault will join a range of international and domestic OEMs this month at the third Iran Automotive Industry International Conference, which takes place on February 29-March 1. Learn more about the conference here