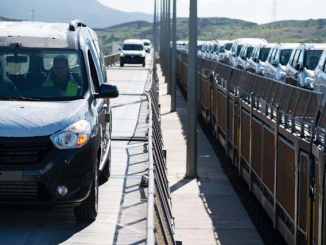 French rail provider Fret SNCF is supporting Trenitalia Cargo with finished vehicle transport of Fiat vans between the carmaker’s Fossacesia plant on the east coast of Italy to the Saint-Priest hub near Lyon, France.

As part of a two-year contract the company’s DF Autochem division is running five trains a week this year, equal to 170 trains, which will increase to 240 trains next year.

SNCF’s Automotive Division transports 1.7m vehicles annually and employs almost 180,000 wagons on routes around Europe to do so. The international market makes up 55% of the division’s activity.

According to the Fret SNCF, DF Autochem teams first made detailed analysis of Trenitalia Cargo’s needs for Fiat, as well as looking at current traffic conditions, and then designed the service.

Fret SNCF put the win down to its reliable service and promise of close cooperation across a range of Fret SNCF-DF Autochem departments.

“Our strong track record for similar contracts on the same route, combined with our ability to keep our client in the picture at all times were decisive,” said Jean Rouche, head of Fret SNCF Autochem operations in South-eastern France.