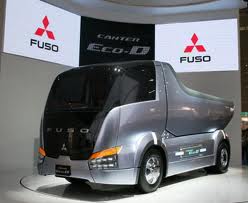 The fifty units of FUSO’s light-duty trucks were given over to Linfox at KTB’s headquarters in East Jakarta at the end of October.

Indonesia is currently FUSO’s largest export market, and the deal demonstrates the carmaker’s expansion in the south-eastern Asian region as a whole. FUSO has been present in the Indonesian market for over 40 years, and the FUSO Canter truck is the top-selling model in Indonesia, with a market share of 52.8% in the light duty truck sector.

Linfox Logistics delivers supply chain management solutions across Asia Pacific and is the area’s largest privately-owned company of its kind. It was founded in 1956 and its largest fleet lies in Australia, though it manages close to 5,000 vehicles across 10 countries.

Fuso’s senior vice president of sales and aftersales, Kai-Uwe Seidenfuss, said: “Linfox Logistics, one of the most well-known supply chain solutions companies in the industry, has been using FUSO for many years. We are proud of this relationship in several countries – and of the newly received orders in Indonesia.

“This type of repeat business, won in a new market, is the highest compliment that a truck manufacturer can hope for.” He added that, “Linfox can also rely on great aftersales support from our FUSO through KTB, our local distribution partner for over 40 years. We are glad to offer the most extensive and professional network of sales, service, and parts outlets of any truck maker in this important growth market.”