FVL conference: OEMs with US capacity and flexibility best placed ahead of any Nafta changes 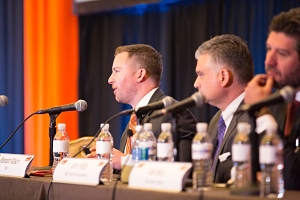 Carmakers with excess US capacity, or those that haven't yet put significant investments into Mexico are best placed ahead of negotiations between the trading partners in the North American Free Trade Agreement (Nafta).

This is according to Brandon Mason, global automotive director at PwC, who highlighted a $60 billion trade imbalance with Mexico as the motivation behind the Trump administration's call for renegotiation of the trade agreement.

Speaking at the Finished Vehicle Logistics North America conference this week, Mason (pictured, left) pointed out that production growth is set to continue in Mexico, with PwC forecasting a rise from 3.5m units a year to 4.8m units by 2023.

"So still very, very strong growth and that is basically on the back of five or six new assembly plants that have been announced that are opening up over the next several years," said Mason.

Over the same period the US is expected to grow production by about 1.2m units and Canada is set to fall.

“Although we don't have any plant closures scheduled in Canada right now, they are losing several key, high volume products and that is where you see the decline,” said Mason.

Among the measures threatened by the US to rebalance the deficit are border tariffs on imports or possible a possible 'border adjustment tax' that would penalise imports.

The automotive industry is directly in the firing line, with any tariffs likely to put pressure on the intricate supply chain across North America. At the finished vehicles level alone, around 2.3m vehicles were exported from Mexico to the US and Canada last year.

With the precise intentions of the Trump administration currently unclear, let alone the outcome, Mason said that the situation warranted a "wait and see" approach.

“However, there are a lot of industry participants that are not waiting and seeing. I would say those OEMs and suppliers that have significant capacity in the US and thus have more flexibility to perhaps move, or who haven't invested significant dollars yet into Mexico, are probably the ones in the most advantageous position right now,” said Mason.

This week, Wilbur Ross, the US secretary of commerce said in a Bloomberg TV interview that talks to renegotiate the Nafta with Mexico and Canada would begin in the “latter part of this year”.

After taking office in January, the Trump administration has shown little signs of softening its stance to secure a better deal for the US from two decade old trade agreement. Ross said both Mexico and Canada know they “have to make concessions”.

Ross also suggested there were many changes that were being sought, including those not related to tariffs or the trade imbalance.

“There were roughly 20 chapters to the original Nafta, and there are several chapters that need to be added, because of the digital economy and other things that have developed subsequently. So there are a myriad points of discussion that will come.

“Which ones will bear the most fruit is a little bit premature to discuss, but there is a lot of meat to be dealt with,” said Ross.