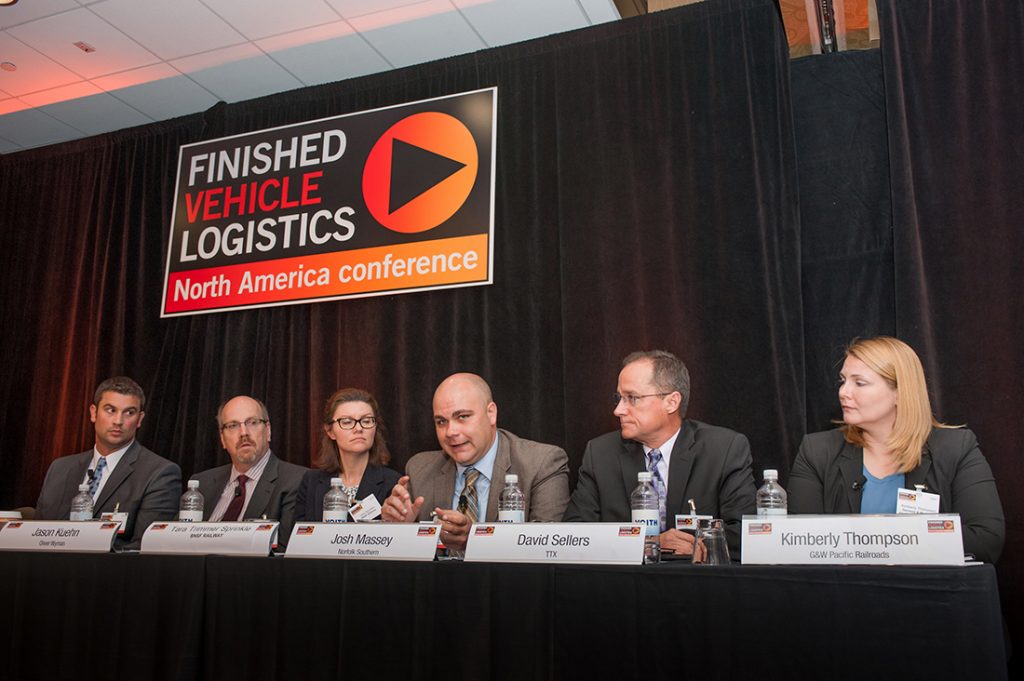 Executives at carmakers, meanwhile, including Toyota and General Motors, have pointed to improved visibility and communication. However, not everyone is happy yet, as shippable ground inventory remains high by historic standards and delivery performance below expectations.

Speakers at the Finished Vehicle Logistics North America conference pointed to a significant capital investment plans, including new orders for railcars of around 3,500 this year, and upgrades in tracks and handling facilities. For example, BNSF Railway, one of North America’s biggest rail providers, spent $3.6 billion in 2014 into capacity expenditure, including 613 locomotives and 82 miles of double track. This year it is adding 330 more locomotives, 950 miles of track replacement and a further 129 miles of double track this year.

“We have expanded all of our automotive facilities to make sure we have capacity for customers,” confirmed Tara Sprinkle, director of marketing for BNSF.

In 2015 Sprinkle said the company plans to acquire 1,500 bi-level and 175 tri-level railcars to accommodate the rise in vehicle movements across North America. The shift towards bi-levels reflects the increasing growth for larger vehicles in the US, including SUVs and pickup trucks.

“Our goal this year is to return to growth,” said Sprinkle. “We are committed to service and to improvements in providing transparency with our customers.”

Like BNSF, Norfolk Southern is also investing in new equipment and infrastructure for automotive. Josh Massey, director of automotive distribution, said the company had purchased a further 350 bi-levels and 150 tri-levels. Since the beginning of 2013 Norfolk Southern has grown its multilevel fleet by 7.5%.

Jason Steele, assistant vice-president for automotive at Union Pacific, the country’s largest railroad for automotive, revealed that the company is spending more than $4.2 billion in capital expenditure this year. Steele pointed to significant projects that would especially expand handling and capacity for imports from Mexico. For example, UP is double tracking the ‘sunset route’ that moves from the border at El Paso, Texas and Nogales, Arizona, through to Phoenix and southern California, major markets for vehicle sales. It is also upgrading most of its automotive yards, and has started construction of a major facility in Hearne, Texas, where seven rail lines converge. “At full capacity this site will handle up to 2,500 railcars per day, and will pull cars out of Mexico for switching,” said Steele.

While the investment in capacity and physical equipment was welcome, rail experts and users also pointed to the need to velocity and performance. Shippable ground count, for example, was still around 80% higher than normal levels; at 180,000 vehicles, the level is close to the highs seen in 2014.

Glenn Clift, chief executive officer at Glovis America, which manages logistics for Hyundai and Kia, said that rail capacity was still limited. In response, Glovis has increased its trucking range for Hyundai and Kia’s plants in Georgia and Alabama, moving vehicles as far as 1,000 miles (1,600km) to Texas, and is considering further extensions.

One of the main issues cited by companies has been the flow of empty railcars. David Sellers, assistant vice president of automotive at TTX, which manages the North American shared pool of railcars, pointed to difficulties in the allocation of available equipment that stemmed from high variability. 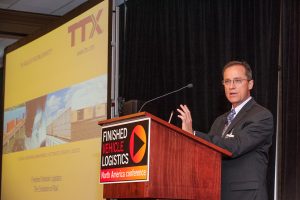 “Vehicle releases are highest on Monday to Wednesday, and low at the weekend,” said Sellers. “We need to smooth this out across the week. Rail works well when things are consistent. It does not work well with variability.”

Sellers also stressed the strategic allocation of those rail assets rather than simply relying on numbers. He made the analogy that, just as adding more vehicles onto a highway can actually slow it down with congestion rather than increasing speed, adding more railcars to the network can have a similar effect if the deployment is mismanaged. In particular there are challenges in moving the right kind of empty equipment effectively to plants or ports. With vehicle production capacity expansion and the growth of assembly in Mexico, such management will become even more difficult.

“A lot of the smaller vehicle production is moving to Mexico,” said Sellers. “Along with that is the fact that very few loads go to Mexico. The idea that you can get efficiency by running loads down there and reloading them in a short area and running them back does not happen in Mexico. Instead you are long hauling empties further distances.”

Josh Massey at Norfolk Southern pointed out that better transparency was important because variability was an issue for rail provides when allocating capacity.

“Shared information about what is coming down the pipeline is important so we can see the forthcoming congestion issues. The best way to work is to identify where we can share information and get visibility in the network.”

As important as having the assets is being able to locate them as close to the point of origin when demand occurs, especially in preparation for seasonal changes, including the weather.

“We understand that you want to get the conveyance method as close to the source of product as you can,” said Massey. “That means the origin roads and plant sites need to be prepared during storage periods, or during holidays, to take on as much empty equipment as they can. You need to get it as close to origin as you can so when things come back up you are ready.”

While problems remain, there were positive signs of companies working more closely together across the supply chain. Matt McCoy, operations manager at General Motors said the carmaker had been working to make better information available to providers, including improved forecasting on the number and type of vehicles they were building. He also pointed to the strategy behind the development of after hours dealership deliveries and stressed how important it was in planning this to consider which ones would make the most difference to improved network performance. 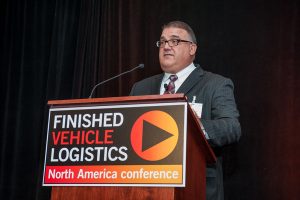 Brian Mason, national manager for strategy and communication at Toyota Logistics Services (TLS), also sent a positive message in regards to how the carmaker, railroads and trucking providers had improved their communication across the network. “We’ve gotten over the angry stage and wanting to fight,” said Mason. “We’re ready to work together now.”

He pointed to systems improvements as well at Toyota, including weekly updates by email for weather and other issues with UP, as well as quarterly meetings and conference calls with BNSF. A new, dynamic dashboard interface for TLS has also improved visibility across the network, allowing for faster responses and deviations.

“We believe we need to collaborate in the ‘new normal’,” he said. “Individually we are strong, but together we are stronger.”