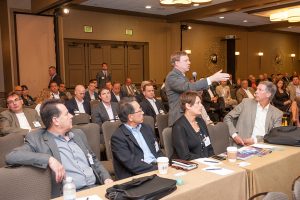 The US car hauling industry’s long-running battle for a weight exemption in the next Highway Reauthorisation bill was raised in an impassioned plea during last week’s Finished Vehicle Logistics North America conference in Newport Beach, California. Mike Riggs (pictured, standing), chief executive officer of the biggest road transport provider to the finished vehicle sector, Jack Cooper Transport, begged a panel of railroad companies – whose lobby group typically opposes such exemptions – not to squash a request that he believes will greatly benefit the industry, without hurting the railroads’ business.

Car carriers in the US cite a number of factors that have compromised their ability to run trucking equipment more productively. As well as the existing legislation that limits loading weight to 80,000lbs (36 metric tonnes), a number of changes and regulations in recent years, from the introduction of soft tie downs (over chains, which compress further), to less polluting engines, driving hour and safety record checks, have contributed to lower truck utilisation and a lower average load factor compared to what equipment is designed to carry.

“What we are saying is that our trucks are designed to handle the weight, we are not going to tear up the highway,” Kirk Williams, CEO of US car hauler Proficient Auto Transport, told Automotive Logistics. “We are such a small percentage of the total trucking sector and all we want is an exemption to the federal regulations, including a 10% weight tolerance and some additional length. That would give us a little overhang so we can go longer on the truck and go a little heavier, up to 88,000lbs.”

The Automobile Carriers Conference (ACC), part of the American Trucking Associations, is also asking for an additional five feet in length (1.5 metres), including an increase in the front overhang of one foot to four feet, and an increase of two feet for six feet of overhang at the back. For a standard, five-axle truck this would result in a maximum gross weight referred to by Williams and an overall length of 80ft (24.4 metres).

These exemptions and changes are expected to be included within the huge Highway Reauthorization bill, which includes funding for US roadways, as well as many other complex regulatory and spending decisions.

However, one of the main opponents to the granting of this exemption is the rail industry, which has generally opposed any attempts to increase trucking size or weight limits. According to executives like Riggs and Williams, this may have less to do specifically with car haulers and more with a resistance to any exception that could open up the floodgates to size and weight changes in the trucking industry as whole. 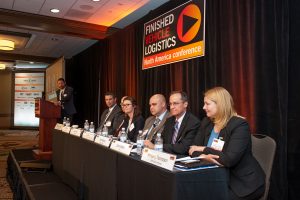 At this week’s conference Mike Riggs took it to railways directly. Addressing a panel of railroad providers that included two of the biggest – BNSF, Norfolk Southern and railcar pool manager, TTX – Riggs said that his was an industry in distress and appealed to the rail industry to cut them some slack.

Riggs made the case that the ability to load an additional vehicle – from seven to eight, for example – would increase lift by 15% immediately and reduce costs for the OEM customer. He added that such a move would not take any business from the railroads. Instead, it would likely help them by moving vehicles to or from rail yards faster.

He also pointed out that the weight exemption wouldn't need to apply for a full truck route either, as most trucks drop off one ore more trucks within the first 100 miles of their journey. "This won't hurt you at all, in fact I would argue that it benefits rail. You need us to survive as no dealership has a rail yard, and we're dying," he said.

With the average load factor having decreased by almost two full units over the last few years, the ACC figures that the weight exemption would eliminate the need each year for more than 104,000 trips, 87.3m vehicle miles and 17.8m gallons of fuel, with savings that could be passed on to the OEM. The ACC also estimates that CO2 emissions could be cut by more than 181,000 tons a year.

“It really is an ask from all of the carriers and all the OEMs – talk to Mr Hamberger [CEO of Association of American Railroads] and get us some consideration separate from other trucking,” said Riggs.

He went on: “I realise you see it as the slippery slope and you're worried the rest of trucking will want the same. But Bill Graves [president and CEO of the American Trucking Associations] has already told Hamberger to his face that won’t happen. My ask is would you please give them feedback. I think it would be good for finished vehicle logistics and sure as hell good for the rest of us car haulers.”

Executives on the panel, which included automotive directors from BNSF and Norfolk Southern, acknowledged that it was an issue that was likely beyond their remit. For his part, Riggs acknowledged that he has already been speaking with the CEOs at most of the major US railroads.

Trucking providers at the conference would have taken some comfort by the support voiced amongst some of their customers. Notably, Glenn Clift, the president of Glovis America, which is a large trucking user on behalf of Hyundai Motor and Kia Motors, came out in strong support for the ACC proposal. Clift pointed out that a one unit load factor increase would significantly reduce dwell time, reduce rail cycle times and carbon footprints.

"I think that we as an industry should support this proposal. Maybe, together, we don't do enough lobbying ont the things that impact us," he said.

The government’s final answer on the issue may come soon. Bob Farrell, executive director at the ACC, pointed out that the final draft of the Highway Reauthorization bill has been delayed a number of times. However, William Shuster, chairman of the US House Committee on Transportation and Infrastructure, wants the extension signed off by September this year.