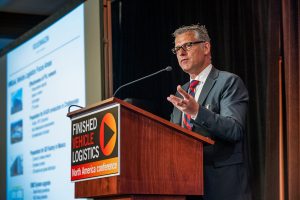 The Volkswagen Group’s aggressive plans for plant capacity expansion and new model launches in North America, on which it is pinning its hopes to reverse declining sales in the US, will test the carmaker’s logistics network and logistics providers, according to Jan Bures (pictured left), executive vice-president of aftersales and services at Volkswagen Group of America, speaking at the Finished Vehicle Logistics North America conference.

Expansion of both locally produced vehicles in the US and Mexico, as well as high value imports from Europe, will require better visibility and delivery performance than the carmaker is seeing today. Performance is currently so far below expectations that Volkswagen has received a warning from the National Automobile Dealers Association (NADA).

Bures outlined a number launches specific to the US and North American market. The company’s new midsize SUV – called the BSUV and based on the CrossBlue concept car – will be built exclusively at the Chattanooga plant in Tennessee next year, ready for global sales in 2017. Plans for a facelift for the Passat currently built in Chattanooga will also put pressure on the supply chain.

Furthermore, Volkswagen is expanding SUV production in Mexico for supply to the US. The Puebla plant will add the Tiguan long wheelbase model in 2017, while also carrying out facelifts to the Golf. The new Audi plant in nearby San Jose Chiapa will add the new Q5, a vehicle that will also be built exclusively at that plant and shipped globally.

“Chattanooga and Puebla will be the only locations where VW Group is going to produce the BSUV and also the Q5 for Audi. So there are challenges for domestic inland logistics and for export logistics,” said Bures.

There will also be a demand on providers handling imports. Volkswagen is going to import the new Audi Q7, TT and A3 e-Tron from Europe for sale on the US market next year. These will add to Volkswagen Group imports from Europe; in 2015 the carmaker is forecasting that these imports will rise to 270,000 units, up from 240,000 in 2014.

Mexican imports are also forecasted to rise to 240,000 units this year, up from 210,000 units, while the new production and plant will increase these numbers significantly, bringing further challenges to the vehicle logistics network.

Bures revealed plans for the carmaker’s logistics concept for the Q5 out of San José Chiapa, which will be somewhat similar to exports from Puebla. Vehicles will move by both rail and short sea to the rest of North America, including through several border crossing points to Houston, Texas for onward distribution northbound in the US and Canada. Rail exports will also move to San Diego.

Underpinning these launch plans and distribution concepts is a need for improved performance in the outbound supply chain according to Bures, who recognised that the logistics network was currently performing under par.

“We need an efficient and functioning logistics network to keep our growth plans alive,” Bures told delegates. “We are currently not performing at a level where we think we should be. Our dealers are not receiving the service we have promised them.”

That was reflected in figures produced by NADA, which indicated that the carmaker needed to improve delivery performance. Among the issues the carmaker wants to address are velocity through the ports, dwell times and transit times, said Bures, displaying a KPI scorecard covered in red numbers for late delivery or poor metrics. That means finding available capacity in transport to speed up deliveries.

“Truck capacity is one reason why we are behind on delivering on our promises,” said Bures. According to Volkswagen Group’s internal measurements, truckaway capacity is currently set for around 16m units in a market selling at a 17m-unit rate. While this 1m-unit gap has improved from as much as 3m units in 2012, Volkswagen and others are feeling the pinch, exacerbated further by driver shortages and legislative restrictions.

On the rail side Bures said that network was also underperforming. The shippable ground count across the sector – the vehicles at plants, ports and yards waiting to be transported – has not improved much from the highs of 2014. Although 2015 did not see the levels of 250,000-260,000 units seen in March 2014, the level of 150,000 by June this year was almost the same as during this time last year, and was some 89% above normal levels, said Bures. Such issues could become particularly worrisome as Volkswagen increases capacity out of Mexico.

"We need an efficient and functioning logistics network to keep our growth plans alive. We are currently not performing at a level where we think we should be. Our dealers are not receiving the service we have promised them."
- Jan Bures, VW Group of America

Bures acknowledged that some of the problems were internal. There is an inconsistency in volumes and releases at plants that put pressure on the supply chain, for example. The company will also upgrade its order management system to iron out discrepancies in the different systems measuring inventory.

While identifying problems, Bures was keen to stress that collaboration and communication across logistics providers has and remains beneficial, particularly during the recent tough winter months. He pointed to the significant value that logistics represented to sales, and suggested that there would need to be more investment in logistics across the board.

“The quality of our logistics network will dictate how successful our sales are,” said Bures. “That is not something a carmaker is willing to sacrifice or compromise on.”