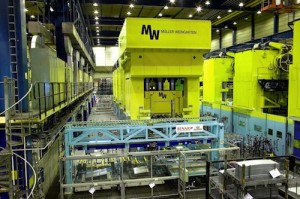 The press, made by Müller Weingarten, was moved in three parts by truck from the equipment maker’s Kaiserslautern facility in Germany to the Rhine river port of Ludwigshafen, where it was loaded on a barge for a three-day journey to Rotterdam in Holland. At Rotterdam the consignment was completed with other segments that had been driven overland to the port and loaded onto the short sea feeder vessel Theseus. Simultaneously a separate convoy trucked 20 containers of press parts up through Germany to the port of Hamburg for loading on to another feeder vessel.

It took three weeks in total to get all the pieces from Kaiserslautern firstly to the Swedish port of Karlshamn and then by truck to Olofström.

“There was a huge amount of planning needed to connect all the dots in this project,” said group project logistics director, Per Thörnblom. “Our timings were on target, which means we did our planning well and we didn’t have any unexpected delays along the routes we chose for the shipments.”

Volvo Car said it had now started to install the press and the first parts would be produced using it in the middle of next year.