Gareth Jones to head the SMMT in 2015 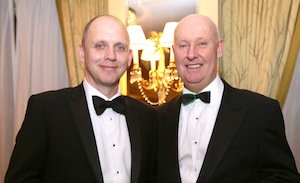 The UK’s Society of Motor Manufacturers and Traders (SMMT) has announced that its new president will be Gareth Jones, managing director of ebm-papst Automotive and Drives UK (pictured left), a German-owned global manufacturing company. He replaces Tim Abbot, managing director, BMW South Africa (right), who has been in the role for two years and will now move to become deputy president.

Jones, who will take up the role from January next year and has been vice president at the SMMT since 2007, has more than 26 years’ experience within the ebm-papst group, operating in the manufacturing supply chains of many global industries including automotive, telecommunications, rail and consumer electronics.

“I’m enormously honoured to succeed Tim Abbott as president of SMMT and I would like to congratulate him on such a successful tenure,” said Jones. “I’m very proud to accept this role and look forward to working with the entire SMMT team and my industry colleagues to promote the best interests of the automotive industry.”