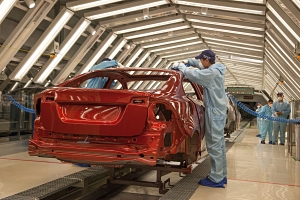 Jaime Gaskell, former general manager for marketing and sales at NYK Automotive Logistics in China, has joined Volvo Cars as head of outbound logistics in the country.

The new role includes responsibility for imported and domestic cars, as well as the warehouse and inland distribution business.

Gaskell started out as a deck officer at Andrew Weir Shipping over two decades ago and later moved to its UK-based office. In 2002, he joined NYK in Europe, based in London. Following that, he had stints in Paris (at UECC for NYK), Australia in 2008 and China in 2011.

In November, Volvo Cars unveiled a new manufacturing strategy for China which involves production capacity being increased and the country developed into a global manufacturing and export hub.

At the time, a spokesperson for the carmaker said the company expected China to eventually account for between 30% and 40% of global Volvo production.