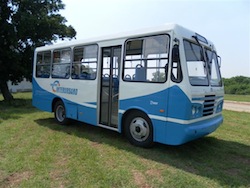 Russian commercial vehicle maker Gaz has begun sending bus chassis to Cuba and expects to deliver 330 by the end of the year. PAZ, a subsidiary of Gaz's Russian Buses division, has sent 210 PAZ-32053 chassis to Cuban bus manufacturer, Caisa, for final assembly and will also be supplying spare parts. The final product will be badged ‘Diana’.

The chassis components are packed at the Pavlovo Bus Plant in Nizhny Novgorod, Russia and shipped to St Petersburg by truck for onward transport to Cuba.  Kuehne + Nagle are providing the haulier service overland to St Petersburg.

“The cooperation with the Cuban side is one of the development stages in GAZ Group’s export strategy,” said Gaz president Bo Andersson. “We have launched GAZelle production in Turkey and Ural production in Kazakhstan, and we are determined to strengthen our export business.”

Andersson said he expected export bus sales to increase by 20% by the end of 2013.

A company spokesperson said GAZ was planning to develop cooperation with the Republic of Cuba on a long-term basis and that chassis shipments would continue in 2014.

The company previously cooperated with partners in Cuba on the development of the Giron bus, which was also based on a Paz chassis, though these were produced more than 30 years ago. Approximately 15,000 buses based on the Paz-672 chassis were made in Cuba between 1970 and 1980.