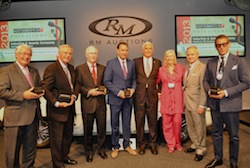 Bo Andersson, CEO of Russian vehicle maker Gaz (pictured centre), has been awarded a Distinguished Service Citation by the Automotive Hall of Fame in Detroit. The plaudit was given in recognition of the progress Gaz has made under his leadership since his appointment to the role in 2009.

Gaz remains Russia’s largest manufacturer of light commercial vehicles and has updated 75% its product range within three years. The citation noted that Andersson has overseen the group’s transition as it adjusts to Russia’s accession to the World Trade Organisation (WTO) and has played a crucial part in the company’s increasing engagement with international players.

The award is given in recognition of men and women who have contributed in some significant manner to the automotive industry and is reserved for those individuals “who are active in the business and are making an important difference”.

Nominees must meet an exacting criteria that includes having made a meaningful contribution to the development of the automotive industry and achieved success in their particular field of automotive endeavor. They must also be recognised as innovative and as a “risk-taker”, which is characterised “by establishing a new direction or developing a position not popular at the time”.