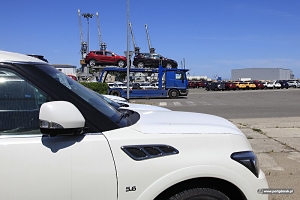 The Renault-Nissan Alliance has signed a three-year contract with Polish logistics provider Adampol for the weekly import of Nissan vehicles through the port of Gdansk, in northern Poland. The vehicles are being imported from Japan, Spain and the UK for delivery to markets in central and eastern Europe (CEE) including Poland, Ukraine, the Czech Republic, Slovakia and Hungary. [mpu_ad align=”right”]

The new business will see an additional 25,000 vehicles a year moving through the port. The decision to use Gdansk for all imports to the region, which starts next month, marks a shift from the port of Amsterdam in the Netherlands, which was previously handling a percentage of Nissan imports into the region.

A spokesperson for Adampol told Automotive Logistics that it had a plan to build a new PDI centre in the port of Gdansk for Nissan pre-delivery inspection. "Distribution to the dealers will be directly from the port by trucks," said the spokesperson. "As a backup solution we can use block trains for southern part of CEE regions."

The new business with Nissan, which follows three years of negotiations with Adampol, builds on an agreement signed in October last year between the Port of Gdansk Authority (PGA) and the Polish logistics and transport operator (now majority-owned by Hyundai Glovis) to “transform the port of Gdansk into the automotive logistics centre of Poland”, according to the port.

This latest move follows a three-year contract signed in January this year that will see Korean carmaker Hyundai export 50,000 vehicles a year from the port to Tilbury port in the UK.

"Adampol has plan to increase a storage capacity in the port for Hyundai cars for long term storage," added the spokesperson. "We already provide full service in port of Gdansk, included handlings and stevedoring."

Nissan has been using the port of Gdansk to move Nissan cars to Lithuania, Latvia, and Ukraine, as well as to move 40% of production output from Nissan Motor Manufacturing United Kingdom (NMMUK) to the Polish market. The remaining percentage has been transported to Poland from Amsterdam, and delivered to a finished vehicle compound near Łodz. [related_topics align="right" border="yes"]

A statement from the port of Gdansk said that the additional shipped through the port each year would all be handled by Adampol. To support the increase in volumes, PGA is investing in additional storage for up to 6,000 vehicles at the port.

With the new business Adampol said total annual throughput at Gdansk could reach up to between 80,000 and 100,000 vehicles.