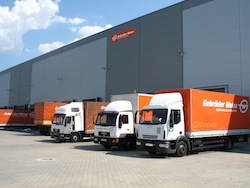 Transport and logistics provider, Gebrüder Weiss, has taken a step to expand its presence in Hungary with the launch of an industrial facility in Györ in the west of the country.

Operations at the new 1,500-square metre facility at the Ipari Park logistics complex began in July according to the company and will grow to offer a range of logistics services, including overland transport as well as air and sea freight. The company highlighted automotive as a sector that it was already supporting and one with a strong showing in the region.

“With the opening of the Györ branch, we aim to further strengthen our position in the region of Western Hungary,” said Thomas Schauer, Gebrüder Weiss’ country manager for Hungary, adding that the move would also negotiate costly toll charges recently introduced around the capital Budapest. “The new location will enable us to continue to ensure economic production costs,” he said in a statement.

The park is currently home to a variety of companies from different industries, but the focus on the automotive logistics sector is strong as Hungary continues to attract investment from carmakers and suppliers.

The group has experienced positive growth in previous years, strengthening its European network more generally. In 2012 it took over haulage firms Diehl and Spren, thus strengthening its presence in southern Germany. Further afield, last year also witnessed the beginnings of work to construct a 10,000-square metre logistics facility for the group in Tbilisi, Georgia.

Before 1990, Hungary was well-known for its high level of bus and truck production. Since then, companies such as Audi and Opel have shifted its focus to powertrain manufacturing, specifically engine production.

GM’s Opel division opened a €500m engine plant in  Szentgotthárd to produce gasoline and diesel engines. The plant will have more than 800 employees and manufacture half-a-million engines per year at full capacity.

In addition, in March last year Daimler opened its Kecskemét Plant, strategically located halfway between Budapest and Szeged, and Hungary’s location as a logistics centre has grown substantially since.