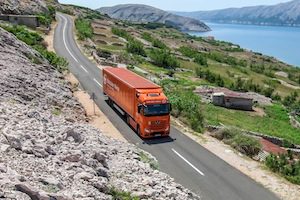 Multimodal transport and logistics provider Gebrüder Weiss is expanding its transport network in the Middle East with a consolidated freight link between Sofia (Bulgaria) and the Iranian capital of Tehran.

The company said integration of the Sofia site into the company's network meant its customers would benefit from direct daily freight runs from its sites in Maria-Lanzendorf/Vienna (Austria) and Dunaharaszti (Hungary) to Sofia. There, the goods bound for Iran are consolidated before an onward journey via Bazargan, on the Turkish border, to Tehran.

Gebrüder Weiss works with international transport and forwarding company Iran Europe for the movement of the freight once over the Iranian border. The two companies have been working together in air and sea freight for more than 16 years. Iran Europe has extensive experience in customs clearance and its own branches in the central economic regions, primarily along the Persian Gulf and in the north of the country.

Gebrüder Weiss said the standard transit time would usually be six working days with departures on a weekly basis.

"The Bulgaria-Iran route enables us to give our European customers rapid access to this growth region by land," said Thomas Moser, director and regional manager, South-East/CIS at Gebrüder Weiss.

In the medium term in Iran, Gebrüder Weiss is seeking to expand its services to include FTL transport and projects and to consolidate its air and sea freight operations from Asia, Europe and the US.

The official lifting of many international economic sanctions against Iran this year has resulted in a boost for domestic car producers and those international brands eager to return and make the most of pent-up demand in the Iranian market, as well as the wider market in the Middle East and North Africa.

French carmakers PSA Peugeot-Citroën and Renault-Nissan, both of which already have a presence in Iran, have already announced new business in the country. Fiat and Daimler are also pursuing business there, as is tier one parts supplier Bosch.

Iran’s main carmaker, Iran Khodro, has said it intends to export 30,000 vehicles to international markets in the next 12 months.