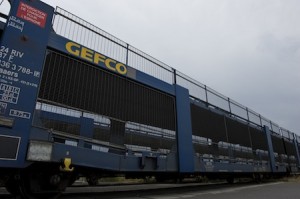 Russian Railways (RZD) increased revenues by more than 14% last year (against 2012) to 1,763 billion rubles ($49.5 billion), with one of the key drivers of that increase coming from its logistics and transport subsidiary, Gefco.

State-run RZD owns 75% of Gefco following its $1.04 billion investment in the company in 2012. RZD is the sole owner of the rail track and key rail infrastructure in Russia and one of the three largest transport groups in the world.

In its financial results for 2013 the company reports that revenue from Gefco amounted to 169 billion rubles for the year, which contributed to overall logistics revenue of 179 billion rubles last year. That compares to the 8 billion rubles of revenue generated by RZD’s existing logistics activity in 2012 prior to the stake in Gefco.

Detailed coverage of Gefco’s earnings and performance in 2013 is available here.

At the same time, operating costs at RZD increased by almost 18% to 1,690 billion rubles, again largely due to the consolidation of Gefco into the company’s business. Other factors were higher depreciation and amortisation expenses, and increases in tax payments following the reduction in privileges relating to rail infrastructure assets. The stake in Gefco was also largely behind the increase in staff costs at RZD, which went from 646.6 billion rubles in 2012 to almost 697 billion rubles last year. Gefco accounted for 22.6 billion rubles in labour expenditure.

Net profit at the company, meanwhile, was down to 36.7 billion rubles last year from 93.7 billion in 2012, a significant drop that the company put down to an unfavourable economic climate and interest payments on existing debt.

Along with Gefco, the group's largest subsidiary after long-distance passenger traffic, RZD also has controlling shares in a number of other companies involved in automotive logistics, including rail provider RailTransAuto and container rail operator TransContainer.

“On the back of unfavourable economic conditions and lower yield of freight transportation services, the Group's companies implemented a number of measures to reduce costs that supported operating income and margins in the target corridor,” said RZD in a statement. It added that the total effect of the cost optimisation programme amounted to 100 billion rubles compared to the initial budget for 2013.