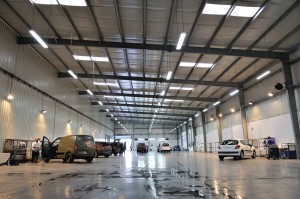 This article has been amended since publication to include comment from Gefco's Paris representatives.

The services include installation of an interior partition and modification of the opening angle of the doors. In all Gefco is applying the service to 4,500 of the vehicles.

Gefco is moving the vehicles from the carmaker’s Mangualde plant in the north-east of the country to its Setúbal facility and, once the work is carried out on the vehicles, providing onward transport services through Spain before the volumes are distributed on the French market.

"We are very enthusiastic about developing this project in Setúbal,” said Fernando Reis Pinto, managing director of Gefco Portugal. “It is a real challenge, not only because of the volumes and the quantities that come into play, but also as a result of all the other requirements which need to be accomplished in record time and require a variety of transport, storage and transformation services.”

Gefco representatives in Paris also told Automotive Logistics: "This logistics solution was an evolution according to the initial project; this new stream began in June 2013 and is expected to continue until late 2014. This agreement is delimited until 2014 to 4,500 vehicles, however, there is a possibility of it being renewed. It exemplifies Gefco Portugal's ability to perform various value-added services in post-production, on the basis of the specific needs of each client. In this case, the operation is unique and specific for Citroën."

Setúbal's compound is equipped to develop and execute a range of logistics operations and the latest project only necessitated a minor adjustment to its operation according to the company.

The transport was studied in order to fit in existing solutions without creating new specific flows, and unit transit to Setúbal by road, according to Gefco. "After intervention, [vehicles] are reseated into a normal flow to Vigo where they follow by sea to France. In France the units are normally dispatched to the respective compound destination where the PDIs are made for delivery."