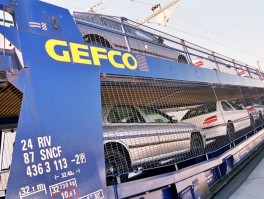 Gefco has reported annual revenue gains of 5.1% in its full-year results for 2017, earning €4.4 billion ($5.4 billion). Sales were supported by a 8.1% growth in global automotive accounts outside of its traditional activity for former parent company Groupe PSA (which now includes GM's Opel/Vauxhall divisions).

The company noted “significant contract wins” in what it described as its Market Clients segment, notably with Jaguar Land Rover (JLR), for which it is delivering cars produced in Graz, Austria under contract to several Western European markets. It is also sequencing components to JLR's Halewood plant in the UK from a new £10m ($13.2m) near Liverpool. In addition it is providing line feeding services to VW's plant in Argentina and has established a parts and accessories warehouse in Buenos Aires. Gefco is also handling deliveries for Tesla to European markets, as well as Dubai and Jordan, and offering a range of services to Audi, Volvo and Renault-Nissan. It also secured new business with repair company Carglass and London Electric Vehicles, the UK-based taxi maker owned by Chinese vehicle maker Geely.

“Our strategy continues to delivery growth, as demonstrated by an improvement over over 8% year-on-year in revenue from Market Clients,” said Luc Nadal, president and chairman of the management board at Gefco Group. “Our operational excellence programme, commenced in 2014, has made strong progress in turning around the company's historically loss-making divisions and reached a milestone in 2017 with both our Overland and Freight Forwarding business returning to profit.”

As the company revealed back in January at a meeting in Paris, Gefco has also been investing in new business, supported by its majority owner, Russian Railways. Last year the company bought rail and compound assets from Rail Trans Auto in Russia to support exports to neighbouring countries, developed inbound logistics services for its customers in Iran and created a strategy for regionally focused fleet operations in the finished vehicle sector.

Gefco also said in its annual statement that it remained focused on a 'test and learn' approach to new and relevant technology for the benefit of customers.

“We are running several pilots and preparing others for areas such as IoT [internet of things] to follow containers using low frequency networks and [artificial intelligence] for optimising truck rotations,” said a spokesperson for the company. “We are also preparing an real size test for robots handling cars on a compound."

PSA revealed last month that it was selling its remaining 25% in Gefco.