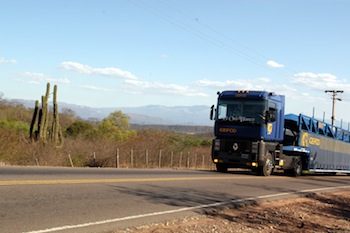 Gefco has announced the completion of the latest phase in its collaborative IT project with the implementation its Opteam software, which has been developed in conjunction with management and IT consultancy Cereza, and is designed to facilitate carrier management. Gefco uses the solution in 20 countries. It will be fully deployed by the end of 2014.

Opteam is part of the Gefco’s TOSCA programme, a three-year project that is designed the improve the competitiveness of overland flows and increase transparency across the supply chain. It is expected to be complete by the end of next year. There are four parts to the programme and Opteam is used for flow flow mapping, data collection, and order tracking systems.

Gefco said it hoped the programme would create greater visibility for customers across its far-flung geographic routes and that Opteam would reduce empty miles during the transport of parts and identify where imbalances recur in various regions.

It is also being used as a cost-saving solution, and has already resulted in more than a 7% reduction in average costs across newly-created circuits.

“Optimising routes constitutes a major financial challenge for Gefco and our carriers,” said Arnaud Levillain, Gefco’s manager of optimization and engineering. “Thanks to the network visibility provided by Optream, we are able to meet this challenge.”

Levillain went on to say that another advantage of the platform was its ability to be used in the framework of calls for tenders allowing the company to offer customers a better offer when it came to deadlines, rates and transport plans.”

Bruno Rivollan, overland corporate director of Gefco, said: “Opteam is an innovative tool and a precursor to Geo-Business Intelligence: thanks to its ability to take into account geographic criteria, it is able to analyse and visualise transport operations and simulate optimisation solutions.”