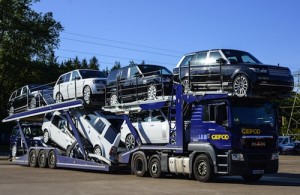 Jaguar Land Rover has signed a new outbound contract with logistics and transport provider Gefco for the movement of Range Rovers from its UK production plants to ports of exit. According to Gefco the new deal follows a review by Jaguar Land Rover of its domestic carriers.

To support the contract Gefco has invested more than £1.5m ($2.4m) in a fleet of new transporters tailored specifically to meet Jaguar Land Rover’s demands on the movement of its vehicles. Each transporter will be able to carry eight vehicles, which Gefco said will result in environmental benefits by using fewer miles to deliver more vehicles. On average the trailers can carry an additional 12% of vehicles depending on the load mix. The company has increased its UK transporter fleet by more than 15%.

The transporter equipment is being supplied by Lohr in the shape of its Euro 5 unit and will be pulled by a MAN tractor. The new transporters will also all be fitted with the Qualcomm tracking system, which tracks the real time movement of vehicles from collection to delivery. Gefco said this would enable more efficient route planning.