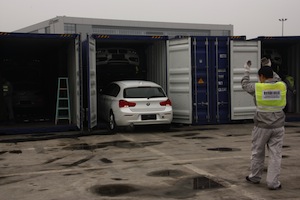 BMW is working with transport and logistics provider Gefco on trial shipments of vehicles in containers between Europe and China.

Gefco has recently completed a second trail shipment involving 40 BMW 1-series cars that were transported between Regensburg in Germany and Chengdu in China. It followed a pilot trial carried out in November last year, which also proved successful. The trails are designed to text the reliability, lead times and quality control on the route.

The most recent journey was completed within 17 days, compared to the 55-day journey by ocean.

Gefco was able to load four cars per TEU container with the aid of an internal racking system provided by specialist supplier, Trans-Rak.

“The challenge for automotive manufacturers exporting into vast regions like China has been that the ports are situated in the west of the country and there is a lack of infrastructure,” said Paul Donaldson, managing director at Trans-Rak. “Traditionally, the solution has been to ship vehicles to the eastern seaboard, but the opening of a new inland freight terminal in Chongqing has for the first time made a pan-China road and rail solution viable, which reduces lead times, saves costs and is sustainable.”

Last month Russian finished vehicle transport provider, ATK, reported that it had cut delivery times on finished vehicle imports from China by more than half by shipping them in containers. The vehicles, supplied by Dongfeng Motors, were also loaded into the containers using an internal racking system. Both BMW and Dongfeng used the R-Rak provided by Trans-Rak

BMW already regularly ships complete knockdown (CKD) kits of the 3 and 5 Series from its Leipzig logistics centre in Germany to its joint venture assembly plant in Shenyang, northeastern China. That service, which began in 2011, is provided by DB Schenker.