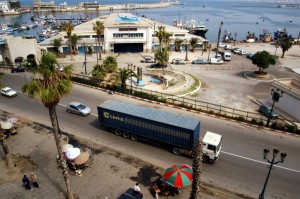 Gefco is expanding its North African network by establishing itself in Algeria and targeting services for the automotive and energy sectors.

The transport and logistics provider said the Algerian automotive sector was growing rapidly, with sales of new vehicles reaching 423,000 units in 2013, up more than 20% compared to 2012. The country is ranked as the second biggest automotive market on the African continent.

“With Gefco’s supply chain expertise, we now aim to contribute to the development of the Algerian logistics sector,” said Bertrand de Techtermann, managing director of the Algerian subsidiary.  “We are backed by a network of reliable and efficient partners who meet the highest standards.”

The company said that Algeria was well located for trade with Europe, the Middle East, Latin America and Asia, and that the country’s logistics sector was experiencing significant change, driven by a large number of investment plans and infrastructure modernisation projects. The most recent announcement came from Renault-Nissan, with the inauguration of a CKD assembly plant for production of the Symbol model. It is the company’s first assembly plant in the country and the site at Oued Tlelat was chosen for its access to the road network, which is the most dense in Africa, and other infrastructural benefits, including proximity to the port of Oran.

Gefco, meanwhile, said its Algerian business was managing the distribution of new vehicles to dealers for PSA Peugeot-Citroën.

Gefco Algeria also handles overseas flows, managing containerised cargo for its industrial clients, from Algeria to countries in the Mediterranean and China. The company is providing logistics optimisation and customs clearance.