General strike in Catalonia hits assembly at plants around Barcelona 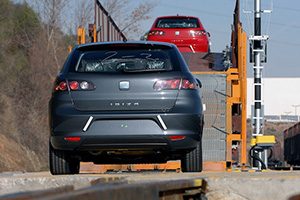 This week’s general strike in the Spanish region of Catalonia has disrupted vehicle production in the region and distribution networks across the modes.

Strike action began on Tuesday (October 3rd) in protest at the police violence that hit the region’s independence referendum on October 1st. Hundreds of people were injured as Spanish police tried to prevent voting that was declared illegal by the government of Mariano Rajoy. In the poll, 90% of the 2.2m people who took part voted for independence.

In response to the police violence, major roads were blocked and the port of Barcelona was brought to a standstill. Train services were also affected but El Prat airport was open as normal.

Spanish carmaker Seat’s Martorell plant near Barcelona is mainly running to schedule, according to a spokesperson for the company, though one of the three lines at the plant, on which the Ibiza and Arona models are assembled, has had to shut down. Seat’s spokesperson said that the closing of several highways had led to a temporary interruption in the delivery of one component that is usually delivered just-in-time to the line, and that therefore Seat had been unable to continue production on that line.

The other two lines are continuing to operate at their usual pace, said the spokesperson.

On the outbound side, a spokesperson for logistics provider Gefco said the action on Tuesday did not affect its vehicle division but acknowledged that it had affected the automotive sector in the region.

At Nissan’s light commercial vehicle plant – Nissan Motor Iberica, also near Barcelona – there was some disruption because of worker absence.

“A number of Nissan employees exercised their right to take part in this protest,” a spokesperson for Nissan in Spain told Automotive Logistics. “We will take the necessary actions to minimise any impact to our customers.”

He added that the company was continuing assembly “with some impact”, but did not provide further detail.

In terms of port disruption, a statement by Barcelona's port authority said that ocean and landside activity there on Tuesday had been “paralysed”, in part because of action taken by stevedores and carriers. A minimum level of service was maintained to handle perishable and dangerous goods. The port said that there had been no incidents of vandalism, however.