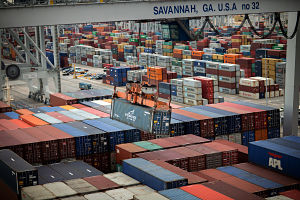 The Georgia Ports Authority (GPA) has just announced the sale to developers of 200 hectares of property to accommodate growing demand for warehousing, distribution and trans-shipping facilities near the port of Savannah.

The new development, located on five parcels of land at GPA's Savannah River International Trade Park, is less than eight kilometres from the Garden City Container Terminal and can accommodate up to 465,000 sq.m of logistics space.

GPA board chairman, Jimmy Allgood, said: "Keeping ahead of demand requires infrastructure development in both the public and private sector. The new facilities destined for our trade park are part of that equation. The GPA is also making the on-terminal improvements necessary to stay ahead of demand.”

The GPA also said it was also currently designing or developing more than 200 acres at the port of Brunswick, adding more space for auto processing at the Colonel's Island Terminal.

A 100-acre expansion announced in October last year forms part of this plan.

Wallenius Wilhelmsen Logistics has already occupied 20 of those additional acres, while International Auto Processing (IAP) has leased another 49 acres. A further 30-acre site should come online this month.

At 621,934 units, fiscal 2016 was the fourth year in a row that vehicle volumes at Brunswick topped 600,000. Another 41,323 moved via Ocean Terminal in Savannah. The long-term plan is to add 600 acres on the island's south side to support auto processing, doubling the capacity for cars and heavy machinery in Brunswick, stated the GPA this week.

A rail expansion project at Garden City Terminal, meanwhile, is expected to be complete by 2021 and will double the Port of Savannah's rail lift capacity to 1m containers a year. Part of GPA's Mid-American Arc initiative, the expansion will also make it more suitable for 10,000ft long unit trains.