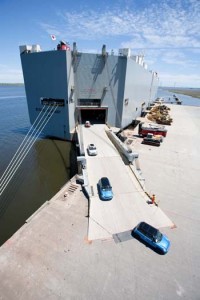 Georgia Ports Authority (GPA) has said it will invest $152m in improving facilities at the US port of Brunswick over the next ten years to keep pace with demand. The expenditure is almost three times that invested during the past decade and includes a fourth berth for ro-ro cargo at the Colonel’s Island Terminal, which handles finished vehicle traffic.

"In order to ensure efficient processing of cargo, our capacity must remain higher than current demand," Foltz said. "To that end, we will be improving Brunswick facilities serving each of our major business sectors here, including automotive, breakbulk and bulk cargo."

Foltz was speaking at the annual Brunswick State of the Port event held on Tuesday, October 20th.

Regarding the fourth berth planned for the Colonel’s Island Terminal, GPA said it hoped to begin construction in 2016.

In terms of automotive tonnage, Brunswick was the fastest growing major ro-ro terminal in the US for the 2015 financial year, according to the GPA. It also showed a 10-year cumulative annual growth rate of 12.8% compared to the national growth rate average for ro-ro ports from 2005 to 2015 of 4.5%. That growth is set to continue as the US Southeast is the fastest growing consumer market for vehicles, according to the GPA.

In terms of ro-ro cargo, the port of Brunswick moved 680,414 cars, trucks and tractors in the fiscal year for 2015, a 0.9% improvement. Top carmakers using the port include Hyundai-Kia, Mercedes-Benz and VW Group.

Measured by tonnage, Brunswick ranks second in the nation for ro-ro, moving 1.3m tons in calendar year 2014. The leading port is Baltimore, which moved 693,000 vehicles in 2014.

The GPA said it is currently preparing 40 acres on the south side of Colonel's Island to be ready for new port customers.

According to the Authority, development projects for next year include additional earthwork on the south side of Colonel's Island, the next phase of the Anguilla Junction Rail Yard expansion, the first phase of a berth upgrade at Mayor's Point, East River Terminal improvements, and continued upgrades at the Colonel's Island agribulk facility.

At Anguilla Junction, the GPA is funding the addition of 2,580-metres of track, a 28% increase, bringing the total length up to almost 12,000-metres. The rail yard is being improved to better handle exports of vehicles produced in Alabama, Tennessee and Indiana.

"Another important infrastructure improvement is the maintenance dredging that must be funded by the federal government," said GPA chairman James Walters. "While the president has included $5.8m in his budget proposal for FY2016, Congress has yet to pass an Energy and Water Appropriations Bill at this time. Securing sufficient funding for Brunswick harbour maintenance is our top priority right now."