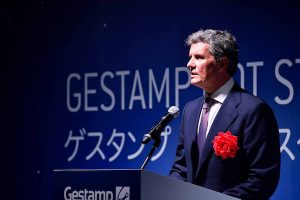 The tier supplier said the new plant would improve its knowledge of the needs of Japanese car manufacturers and underpin its goal of strengthening its strategic relationship with them by adding their home market to its international footprint.

“Gestamp is currently working for Japanese OEMs in the US, China, Turkey, Brazil, the UK, France and Spain,” a company spokesman told Automotive Logistics. “Our goal is to grow the US operations, open them also in Mexico and, of course, supply the Japanese domestic automotive market for the first time .”

Executive chairman, Francisco Riberas (pictured), added: “Gestamp wants to be present in Japan to support and co-develop the car of the future with our Japanese customers, adding value through our state-of-the-art technology in their home market, as we are already doing all over the world.”

In addition to full-service hot stamping capabilities, the Matsusaka plant is equipped with laser-cutting cells and shot-blasting equipment. It will manufacture highly engineered metal body-in-white components.

Costing more than €40m ($46m) to set up, the plant is expected to employ around 60 workers by year-end. That could rise if demand increases, Gestamp said.

Japan has become the 22nd country in which Gestamp has a production plant, though it opened a research and development centre in Tokyo last year and has technical and commercial teams in the country to support Japanese clients.

In September, Gestamp officially opened a new production plant in England. Explaining the group’s philosophy, Riberas said: “We can’t just be in a few countries. We need to be global to give us the critical mass to interact with the carmakers. Otherwise we will never be a strategic supplier for them.”