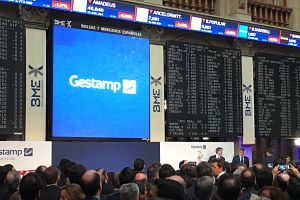 The company, which has its headquarters in Spain, conducted a book building exercise, which captures and records investor demand, ahead of the listing and achieved a price of €5.6 per share sold by existing shareholders. That gave the company a market capitalisation of €3.2 billion ($3 billion).

Founded in 1997, the company has 98 production facilities in Europe, North America, South America and Asia. It supplies the 12 largest carmakers with components including body-in-white and chassis components, equipping more than 800 models spread over 50 different brands. In 2016, its revenue amounted to €7.55 billion.

Following the sale of shares by existing owners, the Riberas family has reduced its stake from 86% previously to 58.95%. This will be reduced further to 54.9% if an over-allotment option is exercised.

Japanese conglomerate, Mitsui has retained its stake at 12.5%. The company bought its interest last year for €466m.

The shares offered under the bookbuild were reported to be oversubscribed. The company announced its intention to list in mid-March.

“The demand shown over the past two weeks pays testament to Gestamp’s potential and its global leadership position. Following the IPO we will continue to focus on our path of profitable growth with a long-term investment approach,” said Riberas.