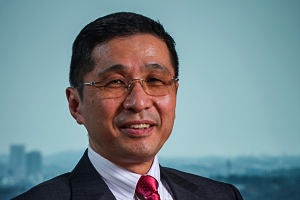 After 16 years as CEO of Nissan, Carlos Ghosn will be replaced by Hiroto Saikawa (pictured) on April 1st this year.

Ghosn will remain as chair of the Nissan board, and continue as CEO and chairman of Renault Group, as well as the Alliance entity, which includes the two companies and Mitsubishi.

Late last year he also assumed the role as chairman of Mitsubishi after Nissan bought a 34% stake in the Japanese carmaker.

“This planned management evolution follows Mr Ghosn's leadership of the recent expansion of the Renault-Nissan Alliance to include Mitsubishi Motors, which positions the Alliance among the top automotive groups in terms of scale,” said a Nissan statement.

His replacement, Saikawa currently serves as Nissan's co-CEO and a representative director. Between April 2013 and October 2016 he was Nissan's chief competitive officer.

He joined Nissan in 1977, and since 1999 he has served in a variety of senior management positions, including chairman of the management committees of the Americas and Europe.

In December after a decade in the role, he also resigned as the Nissan representative director on the Renault board, being replaced by Yasuhiro Yamauchi.

Ghosn said: “This planned change will also allow me to devote more time and energy to managing the strategic and operational evolution and expansion of the Alliance, and ensuring that all its members benefit from the competitive advantages that its scale will deliver.”