Global conference: Automotive is the benchmark for logistics in Mexico 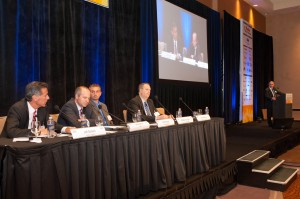 While automotive is not the only industry with a focus on the development of Mexico as a production and export base, it seems customers from other sectors are looking to the logistics processes it employs as the benchmark for their own inbound strategies.

“Companies have approached us in other industries and they want to learn from automotive,” said Mike Parker, president of Union Pacific Distribution Services, who was speaking at last week’s Automotive Logistics Global conference in Detroit. “Intermodal service for auto parts is fairly mature in Mexico. [However], there are a lot of industries where they are just starting to look at intermodal, such as consumer goods.

“A lot of [other industries] look at the automotive industry not only as a benchmark but they want to learn how they have been so successful in that type of service in a challenging environment,” he added.

Jeff Bullard, senior vice-president of Penske Logistics, concurred and said that, while things were not perfect in automotive, it was a much more mature market for Mexico trade and one the company was using as the benchmark for other industries.

Bob Peterson, marketing manager for industrial at reusable packaging expert Orbis, said half of the company’s sales in Mexico were tied to the automotive market and many customers from other sectors were drawn to its automotive experience.

However, he did say that on the aftermarket side of things there was a lot the automotive industry could still learn from some of the retailers it dealt with, and how they get their single products to stores, including in Mexico.

“The majority of the time yes, we use automotive as the standard, but there are pockets where automotive could learn from the other customers,” said Peterson.

Bradley Scroggin at Ryder Supply Chain Solutions also pointed out that while automotive had the answers that some companies needed to improve their logistics, they should exercise caution before trying to make a one size fits all supply chain. “We look on it as the benchmark but apply it with caution in using what is best for other industries,” he said.

Copy and paste where possible
To some extent logistics processes are being developed specifically with the Mexican market in mind, though certain services and even systems established in the rest of North America can already be applied. A good example is in the development of Nuevo Esquema de Empresas Certificadas (or NEEC), a version of the security safeguard certification C-TPAT for Mexican companies. This is shortly to be extended from manufacturing to cover transport and logistics in Mexico, and security in the movement of goods across the border remains one of the main challenges of doing business there.

“It is basically a copy-paste for certifications that the majority of the companies in Mexico are now asking for transport companies to have, at least for the coming year,” said Bullard.

The strategy to drive improvements in logistics are similar between the US and Mexico, and many carmakers and logistics companies are increasingly looking to a “North America strategy”, with logistics integrated between the US and its southern neighbour, according to Scott Grady, vice-president at Landstar, a major provider of border transport. “The border is no longer a barrier,” he said.

But when it gets down to route and transport options, local knowledge takes over, said Penske’s Bullard. Mexico is divided roughly into four separate regions, each of which requires a specific plan, added Parker.

“There is large deficit on modal capacity in the north but there is a surplus in the south, where there is an import bias,” said Parker. “As production continues we need to look at each region and have a specific network and plan. We need to manage the regional freight demands and get a balance which reduces cost.”

At the same time, Mexico is set to become part of a global supply chain, with the parts delivered to and from international markets set to grow, though according to Bullard the north-south flow is likely to remain dominant.