Global conference: Getting to the head of the pack 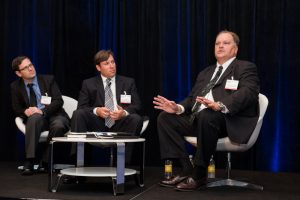 Automotive suppliers are no longer ready to absorb the sizeable costs incurred by the loss or mismanagement of packaging and containers used for the delivery of parts both inbound and in the aftermarket. Instead they are focusing on innovations to save money and making the packaging industry a central part of supply chain management. The renewed focus on driving efficiency and innovation into this part of the industry has also led to some fruitful collaboration since Automotive Logistics ran its Global conference in Detroit last year.

One of those new collaborations is between parts supplier Tenneco and container pooling expert Chep in North America. The companies are already partners in Europe but Tenneco was plagued with container shortages at its facilities in North America. It was also in search of a less wasteful packaging and container strategy. This led Tenneco Automotive’s senior packaging systems analyst, Gary Southerland, to approach Chep at last year’s conference.

“We knew from the start that our plants were starving for containers and that expendable packaging was on its way out,” explained Southerland. “That was the edict that was handed out by senior management and, fortunately for us, Chep was involved with our the European division. It was a simple transition. My approach to Chep at the conference last year was to ask what can you do for North America.

Tenneco had ruled out a ‘big bang’ approach to the problems in North America because of the sheer number of distribution centres it already has up and running in the region. A more incremental approach was required, so together with Chep it started trials taking one delivery lane at a time and monitoring the progress of the new system. Through the combined resources of both companies those trials were successful and demand from Tenneco’s facilities in North America to adopt the system was high.

“Half the plants were reaching out to Chep and asking, ‘when are you going to do this lane,?’” said Southerland.

In January this year the companies reviewed their progress on the trials and assessed the successes and failures, with management authorising full deployment around the same time.

Tenneco’s decision to do something about the container and packaging handling problems in North America is part of a growing appreciation in the automotive industry of how vital this area is to the successful running of a company. Central to that is the issue of cost in an industry that is growing.

“The big word is capital,” said Drew Merill, vice-president and general manager for North America at Chep Automotive and Industrial Solutions. “When you are growing toward the current SAAR (seasonally adjusted annual sales rate) of 17.9m [for new cars in the US] the losses that were previously tolerated become glaring. Using core capital for none-core things like packaging is just not something there is a strong appetite for anymore. Most of the time it is how can I avoid Capex and solve this problem at a lower cost.”

For Southerland it is about having the assets there to move the parts when they need to go and keeping an eye are where they are going. “I look at packaging from the standpoint of the shop floor,” said Southerland. “Without packaging there is no work in process, whether you are doing that in cardboard or returnable containers, it is just as important. You suffer a work stoppage if the container is not there. It is also important to the work cells and receiving docks to make sure that containers are not going to the wrong destinations.”

The trade off between cardboard and returnables is another hot issue. According to Merill, 99% of parts moving on an international level still use one-way packaging. Tenneco found that disposable packaging was becoming more of a problem on a number of levels, including space available in the warehouse to dispose of it, the indirect labour needed to handle that disposal and the environmental impact of doing so from facilities that are more often near residential areas. Added to this there are also safety concerns when triple stacking cardboard containers.

“All these things were hitting at the same time,” said Southerland. “Along with the shortage of containers these issues arise very quickly and we were under pressure from the plant managers to come up with solutions.” 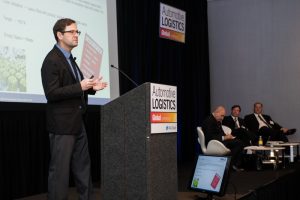 Innovations that saved space, time and money are also in the spotlight at parts supplier Mahle Behr, which makes air conditioning and cooling units for vehicles. Martin Weiss, head of corporate logistics at the company said that packaging density was extremely important but at the same time was something tangible and straightforward. Weiss said the cost saving opportunities in packaging were many and had several examples of where the company had made savings through innovation to prove it. This included a packaging solution for an HVAC recirculation door that through the use of nesting and rotation increased the parts per box from 12 to 72. Transport costs saved over the life of the part were equal to $135,000 with a one time packaging investment saving of $38,000.

The use of slip sheets rather than pallets, which take up 9% of space in a container, also brought savings. Slip sheets are thin pallet-sized sheets made of plastic, heavy laminated paperboard, or corrugated board. Using those increases the box per container for Mahle Behr’s evaporator units from 80 to 136 because the company is able to add a third row in the container. It has also now using 600 fewer 40ft sea containers a year on international shipments of its engine cooling fan by better pack density, saving $1.5m annually.

More accurate tracking of those containers through various means, including RFID technology, is also bringing savings. Weiss said that the loss of containers had at one certain point lost the company $400,000 but that it was now looking extensively at RFID tracking along with better accounting and management.

For Southerland tracking containers was another of those edicts handed down from above. “You need a mechanism that can give you an idea of where everything is,” he said. “It is still a problem for a lot of people but it will be the top question from the managing executives above you. They will ask how you are going to track the expenditure.”