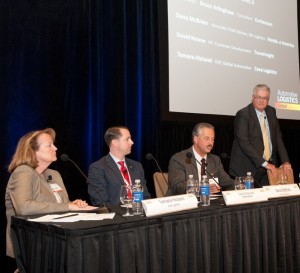 Honda of America is managing the logistics behind the inbound supply of certain parts from its lower tier suppliers to those on the tier one and two level, and is currently running a pilot project with Transfreight for the delivery of those parts. The reorganisation also affects parts purchasing and has been developed over the last four years.

According to the carmaker’s associate chief advisor for logistics in North America, Dana McBrien (third from left), Honda is managing lower tier ordering and quality management, something he said was a “natural progression” in the relationship with its tier suppliers, though he admitted the journey has not always been fun, namely when he worked as purchasing head managing the tier one and two suppliers.

Now Honda has started to take ownership of the freight cost and said it would be good for the company when it took full ownership. Currently, however, the operation is for a select number of parts.

“We don’t buy all of the components, it is a specific and strategic number of products that we manage, which can be problematic as well because in some situations you are not directing where the part comes in from.”

McBrien said the company had seen the costs of logistics fall and rise but has managed to offset costs, such as driver wages or equipment investment.

“Our innovation has to offset the cost drivers,” he said. “We have seen benefits from collaboration and I don’t know where we would be today if we hadn’t. When logistics is brought in house it stays there and we pay. It is something you don’t need to worry about. We are taking away cost flow and administrative duties. Tier suppliers can then concentrate on making their product.”

The project came as something of a surprise to a number of people gathered at the Automotive Logistics Global conference in Detroit, while some welcomed it.

“I used to be in the aftermarket supply chain for Ford and I would have loved to have controlled more directly the production schedule releasing to the suppliers,” said Tamara Histand, now with Ceva Logistics as executive vice-president for global automotive.

Histand said being in that position would provide better information on inbound supply and improve the ability to react in the handling of those goods accordingly.

“Clearly there are logistics cost savings,” she went on. “What is coming into the tier one and two suppliers has got to be looked at to see if it is coming in on the same routes. That will mean improvements in cube utilisation and reducing everybody’s administrative time with the carriers. It also provides better leverage in the marketplace because volumes are higher. I kind of see it as a win-win.”

Thor Oxnard, national manager of parts logistics planning at Toyota Motor Sales, distinguished the set up at Honda as more of a unification than a collaboration and asked what the carmaker was doing in terms of linking production with service parts.

McBrien said that so far Honda had been “dabbling”.

“We have between 20-30 suppliers that we are going into, picking up both manufacturing and service parts,” he said. “We have started to build that network and I would say that we still have progress to make on the stewarding of our resources. There are issues of driver capacity that need to be addressed. But the first step was to build volume within our own organisation and we included service parts into our network. We still have plans.”