Global conference: pressure is on for outbound innovation 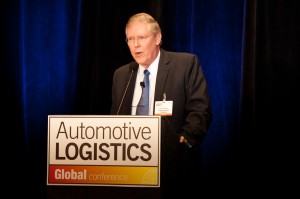 “The enterprise that doesn’t innovate ages and declines. And in a period of rapid change, such as the present, the decline will be fast.”

So said the management consultant Peter Drucker, and it should be a warning to the finished vehicle sector, according to Kirk Williams, president of car haulier Proficient Auto Transport (pictured left).

Speaking at the Automotive Logistics conference in Detroit, Williams said that there are a number of pressures facing the finished vehicle sector that make innovation a priority in the current climate. At the same time, however, there remains a reluctance to take the risk because the rewards of radical innovation are uncertain.

One of those pressures where innovation needs to be applied is capacity. Glenn Clift, president and CEO of Glovis America, the logistics arm of the Hyundai Group. Clift said the industry needed to think about a change in ownership of railcars, for example, even suggesting that carmakers and the wider logistics industry might consider buying them, perhaps in joint venture with TTX, which manages the pool of cars between railways.

“The rail companies don’t provide them for free,” he said. “We should start buying them as an industry; we should have a big pool.”

But he also pointed out that it was the velocity of railcars that was the issue rather than the number of them being built.

Bill Pawluk, CEO of Covertible Trailer Manufacturers Worldwide (CTM) also had capacity on the mind and has done for a number of years now. According to Pawluk, today’s road carriers are running empty 40% of the time. His answer is the convertible trailer, which can haul vehicles and convert into a number of combinations able to haul mixed cargoes. According to Pawluk, Jack Cooper is running prototypes in the US. Meanwhile, CTM developed a prototype in Europe with equipment maker Lohr Industries, which will be on show at the IAA commercial vehicle show in Hannover at the end of September as well as at the ECG conference in Amsterdam in October.

As this publication has widely reported, CTM has a legislative issue in the US and Canada as it currently illegal to convert the truck portion of a car carrier with a stinger to carry other freight. Pretty much any other combination is allowed and Pawluk called on the industry to join him in exerting pressure to change the law.

Kirk Williams also had concerns about the law and saw collaboration with other industry players as a good way of bringing change and innovation. The high level of regulation in the trucking industry was considered an issue where change brought inevitable cost. So was the “sue-happy” culture fuelling the litigation plaguing the sector in the US, said Williams.[sam_ad id=6 codes='true']

Millenials at the wheel

The human element was also a priority for Williams, who noted an ageing driver workforce, with the average driver being in their mid-50s. There is an image problem with the profession according to Williams.

“The trucking industry has done a bad job of making it a desirable career path,” he said. “For the next 18 years there will be a lot of retirement. The [American Trucking Association] says it is 30,000 short on drivers [across the trucking industry].”

Part of the problem is a narrowing wage differential. Finished vehicle hauliers used to earn twice what a normal hauler gets, now its only 20% more.

Williams said the important thing was to understand the thinking of a new generation and get them interested in the profession.

“By 2025, 75% of the workforce will be millenials and they have different approaches,” he said. “We need to understand the millenials, there is a big difference in the thinking now.”

Is change in the air? 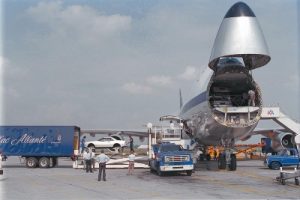 Glovis America's Glenn Clift took delegates through a quick history of some of the leaps made in the past, both as an inspiration to think outside the box and as a lesson to show that innovation for its own sake can be a costly enterprise and needs careful consideration.

Clift reminded the conference of Project Callisto, a GM initiative from the mid-80s, which saw the carmaker ship Cadillac Allante frames from Detroit to Italy for Pinanfarina to modify before shipping them back to the US for final assembly – all done by air freight.

“GM wanted a halo effect with the vehicle, including the logistics,” said Clift, adding that the company converted three 747s to each carry 56 vehicles. The total cost of logistics was sky high, at $24m, an unconscionable sum in this day and age.

On the other hand he lamented the loss of the Vert-a-Pac railcars first used in the 1970s, which were originally used to vertically load Chevy Vegas, achieving 30 vehicles per wagon rather than the standard 18. The company sold 2m of that model and Clift wondered what had made it redundant (although there have been many reports that moving the cars vertically was bad for the vehicles).