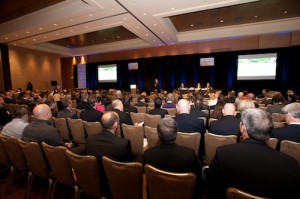 The global rise of vehicle assembly continues, bringing with it a lot more complexity in supply chain management, global part and vehicle movements, and electronics and technology, according to speakers at this week’s Automotive Logistics Global conference in Detroit.

Global vehicle assembly is set to hit 85.7m units in 2014, a 3.8% increase from 2013, with utilisation currently sitting at a healthy 80%, according to figures from PwC Autofacts. North America continues to rise to record levels, expected to surpass 16.5m units this year, and forecasted to surpass 19m by the end of the decade, said Kevin Roberts, head of North American forecasting.

At Nissan North America, for example, production is at record highs, with its two US factories building more than 1m units and expanding capacity in Mexico. Each plant is also producing multiple models with derivatives, adding to the complexity, according to Ben Shain, director of logistics at Nissan North America. The carmaker is also seeing changes to its network as its supply chain simultaneously becomes more global, including parts from Asia, Europe and Mexico, along with new regional suppliers in the US. Shain pointed out that the shifting of production of the Nissan Murano from Japan to Canton, Mississippi was leading to a significant increase in new suppliers across the Midwest as well as the southeast. The company is also seeing a huge jump in product launches and model changes.

“We’re managing more than 1,000 deliveries daily, and each one is depending on quality,” said Shain.

Shain said that the increasing complexity meant more risk relating to weather, currency and transport delays. “It’s hard for a logistics manager to sleep at night.”

Shain said that improvements needed to be made in small steps with a focus on better logistics planning. Part of that is related to organisational structure, and deciding how much Nissan centralises and what is left to regional control. Plans have changed with the growth of exports, something has led to new groups outside the central logistics function, said Shain. On the inbound side Shain said that plant managers were happiest when they had visibility and control over daily operations, while the wider supply chain risks and details should be managed by logistics teams.

One of the problems is that complexity is not always given due consideration in certain areas of the automotive sector, according to Oliver Reisch, chief operating officer at German supply chain software provider, Flexis.

“What we see for many of our customers is still that the global complexity is not in everyone’s heads, especially if the planning is done centrally, and the people have not travelled so much around the world,” Reisch said. “The change to a distributed network is very complex to handle and the understanding is not yet there.

Technology changes, but power is with the people
That complexity is influenced by a number of factors including the technology content of the vehicles being made, the sourcing locations for the technology and the way they are being moved. The collaboration needed to manage these complex supply issues, including between those making and moving the product, and those companies and state authorities, is something that needs to surpass international borders, said Nigel Francis at the Michigan Economic Development Corporation (MEDC).

According to Francis, the next 30 years will see a shift to slightly smaller vehicles with higher aluminium and plastics content, along with bigger changes involving the software, a fact that is set to radically change the automotive industry. Among the changes that Francis anticipated was the arrival of virtually connected vehicles and increasing driver automation of the vehicle. With the systems and technology of the vehicle, Francis pointed out that vehicles would be capable of being geo-located within one inch, which would have huge implications for logistics.

However, despite the potential and implications of technology, both Francis and Shain stressed the importance of people and developing the right skills for logistics and supply chain. ‘We run on brainpower’ is a new slogan that MEDC will launch, said Francis.

“Everyone always talks about ‘business to business’, but we find that in most cases it is really ‘people to people’,” said Francis. “People buy from other people.”

Shain made the same point for Nissan. “Logistics is and always will be a people business. People are driving force of logistics.”