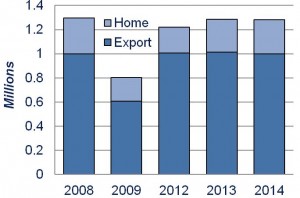 The latest figures from the Society of Motor Manufacturers and Traders (SMMT) show that exports of passenger vehicles made in the UK dropped by almost 11% in October to 116,165, against 130,263 for the same month last year. The figure follows an export drop of more than 8% from the previous month, compared to September 2013. According to the SMMT, global economic uncertainty is affecting demand. The continued sales slump in Europe and Russia is one of the reasons that overseas demand has fallen.

Exports accounted for 78% of UK car production in 2014 year-to-date, which stood at almost 1.3m, with a little over 1m vehicles exported. Of that number, there is an even split between vehicles exported to the European Union (EU) and those to non-European countries.

Manufacturing of passenger vehicles was down 6.7% in October to 150,060 units. However, the SMMT’s CEO, Mike Hawes, said that overall, the UK’s manufacturing industry was in a strong position.

“Billions of pounds have been invested into UK facilities in the past two years, with several new models starting production this year and more in the pipeline,” he said. “There is still demand for UK-built products given their reputation for quality, design and engineering excellence.”

Exports are the backbone of UK manufacturing because 80% of what is made in the country is exported, while 85% of the cars sold in the country are imported. At a recent meeting held by Nissan and Sunderland City Council in London, Professor Garel Rhys CBE, of the Cardiff University Business School, indicated that this was a positive equation because the UK industry is not dependent on its home market for growth.

That means that carmakers in the UK will be looking for an improvement in Europe.

The drop in exports was more pronounced in the commercial vehicle sector, which showed a fall of 30.6% for October, though production for the UK market was up 14.6% in the month. UK commercial vehicle manufacturing declined 8.9% in October, the smallest monthly fall since June 2013 according to the SMMT.

“The heavy fall seen in UK commercial vehicle manufacturing over the past year is now levelling off as the effects of last year’s restructuring only apply to year-to-date figures,” said Hawes. “With new models now being produced in UK plants, production for the home market grew for the first time since June 2013. It remains to be seen if the recent growth in EU demand will continue, but the indications are of greater stability in the months to come.”