GM and its supplier network to invest $500m in Argentina site 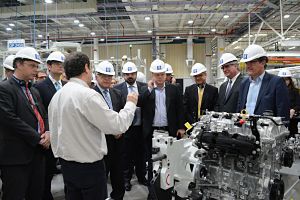 General Motors (GM) has announced a $500m investment at its Alvear plant (pictured) in Sante Fe, Argentina, to develop manufacturing facilities for a new Chevrolet-branded model.

Of the total amount to be invested, $300m will come from GM itself and $200m from the company’s supplier network.

The new funds will be invested over the next three years, with first production expected in 2020.

Carlos Zarlenga, president of General Motors Mercosur, said: “GM renews its commitment with Argentina, and it will be reinvesting strongly in the country with the aim of producing a new, high value-added global model which will help strengthen Argentina’s basis of exports in line with the 1 million plan launched by the National Government, tending to increasing domestic production and the positioning of Argentina as a global export platform.”

The investment plan also includes an increase of GM operations at the Terminal Puerto de Rosario (TPR), where about 6,000 containers and 1,500 vehicles a year are currently moved.

Once completed, the annual container volume will double and the import and export of vehicles at the terminal will total over 100,000 units a year.

Back in August, the company, which combined its Argentina and Brazil operations under the GM Mercosur name earlier this year, announced a $1.4 billion investment in its São Caetano do Sul, Joinville and Gravataí facilities in Brazil.

The latest developments in the South American automotive sector will be discussed at the Automotive Logistics South America summit which takes place on the November 28th this year.