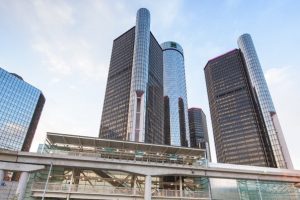 General Motors has called on the US and China to pursue long-term, lasting trade policies in the face of threats by each country to impose a total of $50 billion in import tariffs on each other’s goods. China has said it would impose a 25% tariff on 106 US products, including automobiles, if Washington goes ahead with plans to levy duties of 25% on more than 1,300 industry products, including vehicles and vehicle parts such as seats, suspension springs, hinges and nickel-cadmium batteries for electric vehicles.

The US list is subject to public consultation and possible amendment before any tariffs are imposed.

“We support a positive trade relationship between the US and China, and urge both countries to continue to engage in constructive dialogue and pursue sustainable trade policies,” the Detroit-headquartered company said in a statement this week. “We continue to believe both countries value a vibrant auto industry and understand the interdependence between the world’s two largest automotive markets.”

The US carmaker sold more than 4m vehicles in China last year, up 4.4% from 2016. This year in China GM and its joint-venture partners plan to introduce 15 new and refreshed models with an emphasis on the SUV, MPV and luxury vehicle segments. It sells under the Baojun, Buick, Cadillac, Chevrolet, Jiefang and Wuling brands in China. GM also exports vehicles to China from the US, including Cadillacs, and imports the Buick Envision SUV and Cadillac CT6 to the US from China.

The US-China trade dispute was sparked off by president Donald Trump imposing a 25% tariff on imports of steel into the US and 10% on aluminium shipments from most countries starting March 23rd this year.

Automotive industry players unanimously condemned the move, saying it could lead to more expensive components and vehicles, less investment in new products and car plants, and the loss of jobs from plant closures.