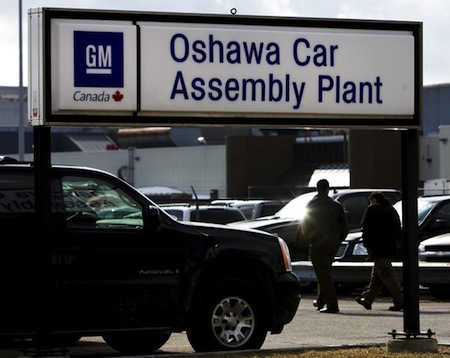 General Motors has announced plans to extend the operations of one of its production lines in Oshawa, Ontario. Operations were originally intended to end at the assembly plant next summer, but the Detroit carmaker has pushed the new cut-off point to 2016.

The decision is reportedly to meet demand for the Chevrolet Impala Limited and the Chevrolet Equinox, after global market research company JDPower & Associates awarded the vehicles high marks for quality. During last year’s contract talks with unions, the decision was taken to cease the production line after GM claimed that Canada was now the most expensive country in the world for vehicle production.

The Canadian auto workers union, now called Unifor, later cut a deal to improve costs.
The plant currently employs around 3,500 workers in total and runs two assembly lines, 650 to 700 of which work on the extended line.

The president of the local union Unifor Local 222, Ron Svajlenko, said, “The extension into 2016 gives our workforce some stability and again, we were going through a potential of layoffs and right now that's not the case, so that's very good news for us.

“As long as we continue to build vehicles out of that facility, we have the opportunity to remain in the hunt for any kind of long-term additional products that General Motors may need to build," he added. Svajlenko pointed to the potential of the next-generation Camaro coming to the plant.

In a statement, Unifor’s president, Jerry Dias commented: “It is a testament to what we’ve been saying about this plant all along – that the skills and efficiency of the workers at the plant make it worth keeping open.”

The Oshawa plant has had a rocky history, with operations set to close in 2008. The following year, a bailout of over C$10 billion ($9.7 billion) from the Canadian and Ontario governments saw these become shareholders to secure the production line, with the proviso that General Motors continue its operations in Canada.