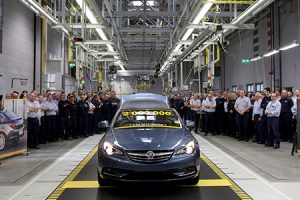 GM's Opel plant in Gliwice, Poland, has started assembly of the new generation Astra five-door hatchback for Australia and New Zealand. The first car rolled off the assembly line last week and it will be the fifth model GM Europe is exporting to the two countries.

“To date, in Europe we have already received more than 250,000 orders [for the new Astra],” said GM Poland's general manager, Andrzej Korpak. “We are very proud that this Gliwice-made best-selling model will be offered in the markets of Australia and New Zealand as well.”

Opel's plant in Rüsselsheim, Germany, makes the Insignia VXR for the Antipodean markets. All of the vehicles are exported via the port of Antwerp in Belgium and shipped by Höegh Autoliners. The ports of entry in Australia are Melbourne, Brisbane, Freemantle and Port Kembla. The Astra will be delivered to New Zealand through Auckland port.