GM pulls assembly out of troubled Russian market; VW cuts back in Kaluga 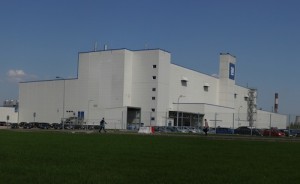 General Motors has announced that it is stopping volume production of midrange vehicles at its plant in St Petersburg by the middle of this year and will concentrate on importing premium Cadillac and Chevrolet products to Russia, such as the Corvette, Camaro and Tahoe. It will end sales of Opel vehicles in Russia by the end of the year as well as most Chevrolet models.

Full production has already stopped at the St Petersburg plant and assembly from semi-knockdown kits (SKDs) will stop in June.

GM will also discontinue production of midrange Chevrolet and Opel vehicles under contract with Russian partners Gaz in Nizhny Novgorod and with Avtotor in Kaliningrad.

“Russia is in a deep recession and no improvement is in sight,” a spokesperson told Automotive Logistics. “On the contrary, the poor economic outlook is forcing numerous corporations to review their strategy in Russia. Last year we sold 20% fewer cars in Russia than in 2013. To make matters worse, the dramatic decline of the ruble is extremely expensive for us; the FX [foreign exchange] situation alone cost us $200m in 2014. Despite significant price increases, our losses increase with every single car sold and a recovery of the Russian car market is not foreseeable.”

GM's effective pull-out in Russia will have serious implications for inbound and outbound logistics flows, including those handled by its principle logistics provider in the country, Gefco.

Following the changes, General Motors will remain as only a small, niche market player in Russia, selling and producing a few thousand cars. GM sold as many as 257,600 vehicles in the country in 2013, before declining to 189,500 last year. In 2011 it was among several carmakers that signed up to Russia's Decree 166, for which it committed to producing 350,000 vehicles in Russia and increasing localisation to 60% by 2018 in exchange for zero import duties. The latest announcement reflects a significant about-face in strategy.

GM's sales in the first two months of the year in Russia are down more than 70% across all its brands compared to 2014.

The St Petersburg plant, which had been slated for a significant capacity increase just a few years ago, will suspend assembly of SKD assembly by June, although GM said that it is idling the plant rather than closing it outright, suggesting that it wants to maintain a footprint in the country.

GM will also end production of the Chevrolet Chevrolet Aveo under contract at the GAZ plant in Nizhny Novgorod, which began in 2012. Likewise, contract production with Russian carmaker Avtotor in Kaliningrad has also been stopped. Following an agreement signed with GM in 2009, Avtotor began assembly of semi-knockdown kits of the Opel Astra and Zafira, which had been brought by rail from GM plants in Europe. Despite GM’s decision to stop that output, Avtotor said it remained committed to continue its relationship with GM should the carmaker return production to Russia.

That could be a lengthy wait. According to PricewaterhouseCoopers (PwC) the car market in Russia is unlikely to rebound until 2020.

Up until then GM will concentrate on importing premium segment vehicles instead, despite the hefty vehicle tax Russia imposes on the import of finished vehicles.

“Russia is the fourth global market for Cadillac,” said GM’s spokesperson. “Cadillac sold 1,324 vehicles in Russia in 2014. Chevrolet Tahoe, Camaro and Corvette are niche products but quite successful in the marketplace and we also expect to grow the sales of these models in Russia."

According to a statement from GM, The GM-Avtovaz joint venture will continue to build and market the current generation Chevrolet Niva in Togliatti. According to the Russian news source Autostat, pre-production of the new Niva model has been suspended. The Togliatti plant made just more than 45,000 Niva units last year, almost 13,000 fewer than the previous year.

GM’s decision to pull midrange production also raises issues for logistics provider Gefco, which moves volumes of Russian-bound finished vehicles for GM as well as handling inbound deliveries as part of its fourth party logistics agreement with the carmaker.

The logistics provider will have also seen declines in its Russian automotive business as a result of scaled back sales and production by PSA Peugeot Citroën, which has seen a steep fall in sales. Earlier this year it suspended production temporarily at its joint venture plant with Mitsubishi in Kaluga, south of Moscow.

Last year, PSA and Gefco cancelled a rail flow from France to Kaluga that carried material for Russian production because the volume had dropped too low to sustain the mode. Material has since been dispatched to Russia by road.

Gefco, which is owned 75% by Russian Railways, retains big ambitions in Russia. It has said it plans to occupy 20% of the country’s logistics market, excluding commodity transport, compared to a 6% share in 2013, but given the size of the contract it has with GM, this could be compromised by the carmaker’s latest announcement (read more here).

Gefco did not provide a response to the announcement this week.

VW makes adjustments in Kaluga
In related news, Volkswagen has said it is cutting back on production in Russia because of a continued weak economy and is taking three steps to revise output at its plant in Kaluga until later this summer: from the start of April to the end of July there will be no production on Fridays at the plant; it will close altogether for an additional eight days during the beginning of May; and during that break the plant will switch to a two-shift production mode.

VW is also aiming to stem any loss of work that comes as a result of the reduction in output at Kaluga and said that was sending 120 workers to its German plants in Zwickau and Emden for a three-month training programme relating to paint shop and assembly skills. More employees will be transferred to VW’s new central warehouse in Chekhov, near Moscow, which will start operations in the second quarter of 2015, creating 280 jobs. Some employees will also be transferred to the new engine plant in Kaluga, which will start operating at the second half of 2015 and will create about 300 jobs in total.

As indicated in these moves, VW was more positive than GM about the long-term growth prospects in Russia. In a statement the German carmaker said: “Volkswagen Group is committed to the Russian market and is consecutively fulfilling its investment programme in Russia. A new body shop was opened at the Kaluga factory in 2014, a new engine assembly in Kaluga and a new master depot in the Moscow region are currently being built.”

The scaleback in production follows news that Korean carmakers are cutting imports to the country and aiming to make the most out of local production facilities. Korea's Hyundai-Kia have generally bucked the trend in sales in Russia, with Hyundai sales up 4% in the first two months of the year compared to last year, and Kia's down 4% in an overall market that has declined 32% so far.

The challenges facing OEMs, tier suppliers and logistics providers serving the Russian market will be under discussion at this year’s Automotive Logistics Russia conference, which takes place on 24th June in Moscow. Learn more and register here.