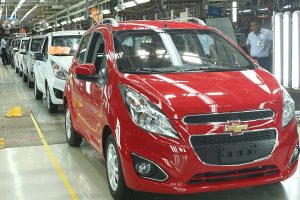 General Motors has announced further restructuring of its international businesses, including moving to an export-only production model in India and exiting the South African market altogether.

Poor sales, margins and a lack of scale in the supply chain have contributed to the decisions. They follow a recent pattern at GM of retreating from less profitable regions.

GM expects to take a charge of $500m on the back of the decision, which will include $200m in cash. The restructuring is expected to help the company realise $100m in annual savings.

In India, where local sales of new Chevrolet vehicles will stop this year, the Talegaon plant will continue to produce cars for export to Mexico, and Central and South America.

Production of the new Chevrolet Spark hatchback (branded as the Beat locally) recently started for export and later this year production of the Spark sedan will also begin.

In September last year, the company announced a record month for exports of Spark vehicles, with 7,661 leaving the country. At 70,072 units in the 2015/16 fiscal year, it also became the sixth most exported passenger car from India. However, the carmaker has pulled back from its original ambitions in India, where it originally planned to invest considerably in a new plant and small car.

“In India, our exports have tripled over the past year, and this will remain our focus going forward,” said GM’s head of international, Stefan Jacoby. “We determined that the increased investment required for an extensive and flexible product portfolio would not deliver a leadership position or long-term profitability in the domestic market.”

The first shipment of cars from India to Mexico was announced in October 2015 with 3,000 left-hand-drive cars shipped from the Mumbai Port Trust of Maharashtra.

The Halol assembly plant in India was shut at the end of April, and GM has said negotiations continue on the sale of that asset.

South Africa exitThe company will also stop making and selling Chevrolet cars in South Africa this year after 90 years of assembly in the country. It is selling its Struandale light commercial vehicle plant in Port Elizabeth, as well as its vehicle conversion and distribution centre there, and is passing control of the parts distribution centre to Isuzu.

Assembly of Isuzu vehicles began over 44 years ago and for the past four years, Isuzu has occupied the number one position in the medium- and heavy-duty commercial truck segment of the South African market.

GM also owns the Opel brand in South Africa and says it is working with PSA Group to evaluate its future there, given the French company’s pending purchase of the brand.

South African labour union Numsa said it expected 600 workers out of a total of 1,500 would lose their jobs as part of the sale and restructuring.

“After a thorough assessment of our South African operations, we believe it is best for Isuzu to integrate our light commercial vehicle manufacturing operations into its African business,” said Jacoby. “We determined that continued or increased investment in manufacturing in South Africa would not provide GM with the expected returns of other global investment opportunities.”

Sources at GM have told Automotive Logistics for several years that its production n South Africa lacked the scale and volume to be competitive, with little scope to increase sourcing in the local supply chain. A statement from South Africa’s Ministry of Trade and Industry pointed out that, since 2013, GM’s plant had not been meeting the minimum production level of 50,000 units required to receive incentives under the country’s Automotive Production and Development Programme (APDP).

Earlier this year, Isuzu acquired a 57.7% interest in GM’s East Africa business, saying it made the investment to expand commercial vehicle production and sales in the region.

As part of the international restructuring, GM has said it will also “streamline” its regional headquarters in Singapore.

These moves follow recent decisions by GM to pull out of markets where it is less profitable, while focusing more on higher margin and emerging regions, products and technology. This past spring, the carmaker announced that it would  sell its European business to PSA Group and, more recently, to sell its Kenya plant to Isuzu.

Back in September 2015, GM announced that it was stopping volume production of midrange vehicles at its plant in St Petersburg, and end most sales in Russia. This coming October the Holden plant in Australia will also close.

Following the latest decisions, GM CEO Mary Barra said: “Globally, we are now in the right markets to drive profitability, strengthen our business performance and capitalise on growth opportunities for the long term.

“We will continue to optimise our operations market by market to further improve our competitiveness and cost base.”