GM’s Holden to end manufacturing in Australia in 2017 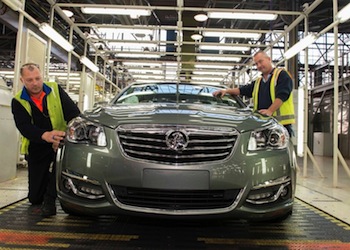 GM has announced it will discontinue vehicle and engine manufacturing in Australia by the end of 2017, as well as significantly reduce its engineering operations. GM operates under the Holden division in the country, with headquarters in Port Melbourne.

“The decision to end manufacturing in Australia reflects the perfect storm of negative influences the automotive industry faces in the country, including the sustained strength of the Australian dollar, high cost of production, small domestic market and arguably the most competitive and fragmented auto market in the world,” said GM's outgoing chief executive, Dan Akerson.

GM said the country’s automotive industry was heavily trade exposed and that the appreciation of the currency alone meant that at the Australian dollar’s peak, at US$1.10, making things in Australia was 65% more expensive compared to just a decade earlier.

The move will mean the loss of 2,900 jobs over the next four years –1,600 from the Elizabeth vehicle manufacturing plant and approximately 1,300 from Holden’s workforce in Victoria.

GM Holden’s chairman and managing director, Mike Devereux, said an important priority over the next four years would be to ensure the best possible transition for workers in South Australia and Victoria.

“This has been a difficult decision given Holden’s long and proud history of building vehicles in Australia,” said Devereux. “We are dedicated to working with our teams, unions and the local communities, along with the federal and state governments, to support our people.”

Holden said it would maintain a national sales company, a national parts distribution centre and a global design studio in the country. Sales and service will continue through the network of Holden dealers in Australia and New Zealand.

In August this year GM announced it was stopping Opel distribution in Australia and winding down the sales network with immediate effect because it was not financially viable.

At the time the company said it would be looking at the potential of a GM Holden badged “niche product”. It remains unclear what the company’s plans are here. The company has provided no more detail beyond its initial statement and did not comment on where vehicles for sale in Australia would be supplied after the end of local assembly.

Manufacturing exodus
This latest announcement builds on what is looking like an exodus of car manufacturing from the country. In May this year Ford also announced it was stopping vehicle production in Australia in October 2016, again citing high manufacturing costs and market fragmentation amongst the reasons for the withdrawal.

More recently, in October, Toyota said it was cutting production at its Altona plant near Melbourne because of a drop in export orders, which account for 70% of total production output from the plant.

Toyota will be the only carmaker left in Australia still making cars following the announcements by GM and Ford, that is if a similar announcement does not come from the Japanese carmaker in the coming weeks. Australia’s prime minister Tony Abbot is holding talks with Toyota chiefs, including the head of the carmaker’s Australian unit, Max Yasuda, in an effort to convince them to continue manufacturing in the country.

GM’s decision has been a blow to automotive parts suppliers based in Australia. The Federation of Automotive Products Manufacturers (FAPM) said it was “extremely disappointed with the decision”.

“The closure of GM Holden’s Australian manufacturing facilities in 2017 will impact tens of thousands of people working in the automotive components sector,” said CEO Richard Reilly. “It has rocked the supply chain.”

FAPM said it was concerned that the decision could lead to the end of a viable local industry.

“That would spend the end of the Australian automotive manufacturing industry,” said its national president, Jim Griffin.

“Ford had already announced manufacturing would end in 2016; with Holden’s announcement there isn’t enough volume for components locally to make us viable.” He added: “If you cut the trunk down, the branches will come down with it.”

The move is also a string in recent changes to GM's global business aimed at increasing profitability. Earlier this month, the carmaker announced that it would end Chevrolet sales in Europe by 2016 to focus more on Opel/Vauxhall in the region, effectively ending around 200,000 exports from South Korea to the continent. The carmaker has also realigned its organisation in Asia, removing China and Russia from its International Operations unit.