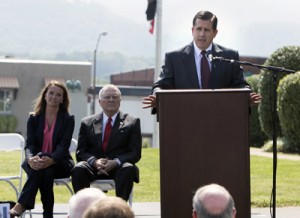 Georgia Ports Authority (GPA) and North American rail provider CSX have signed an agreement with local government bodies in the US state to set up an inland port at Chatsworth in Murray County. The Appalachian Regional Port will have direct rail links to Georgia’s port of Savannah and will support automotive freight movements, including finished vehicles and tyres, among other freight.

It is expected to open in 2018 with a capacity for 50,000 containers and according to the project’s development plan, that capacity will be doubled in ten years.

The use of the CSX rail route will create a new intermodal option for freight movements to the port, and is projected to reduce truck traffic by 40,000 moves annually.

“Our goal is to create the largest inland intermodal complex in the eastern third of the US, expanding our reach with more economical shipping alternatives for new and existing customers,” said James Walters, GPA board chairman.

The facility, which will be on a 17-hectare site adjacent to highway 411, will feature a direct terminal rail link. It will handle import, export and domestic cargo.

For the last fiscal year ending in June 2015, the port of Savannah saw the highest-ever volume of intermodal rail moves. Almost 369,350 containers were moved by rail over the period, up from the previous record of 333,000 for fiscal year 2014. The growing volumes moved by rail resulted in an increase of around 11% for the year.

GPA also moved more finished vehicles and machinery than ever in the year just ended. Combined, Brunswick and Savannah moved 714,000 units of roll-on/roll-off cargo, an improvement of 13,313 units or 1.9%. Of the total, Brunswick handled 680,427 units.